As he waited for the Harbaugh brothers to walk into Pioneer High School for their induction into the AA Pioneer Athletics Hall of Fame Friday night, Pioneer offensive lineman Brendan O’Bryant predicted “an amazing night.”

“To have John and Jim and the entire Harbaugh family here is very humbling,” said the sophomore. “I’m just kind of speechless to know the Harbaugh brothers attended Pioneer—that is such a great legacy.”

Forget the Super Bowls and Rose Bowls. This night was all about dusty fields, Little League recollections and brotherly love.

John and Jim Harbaugh zoomed down memory lane Friday night, enthralling about 500 people in the Pioneer High School gym with memories of growing up as hyper-competitive and sports-loving kids in Ann Arbor. 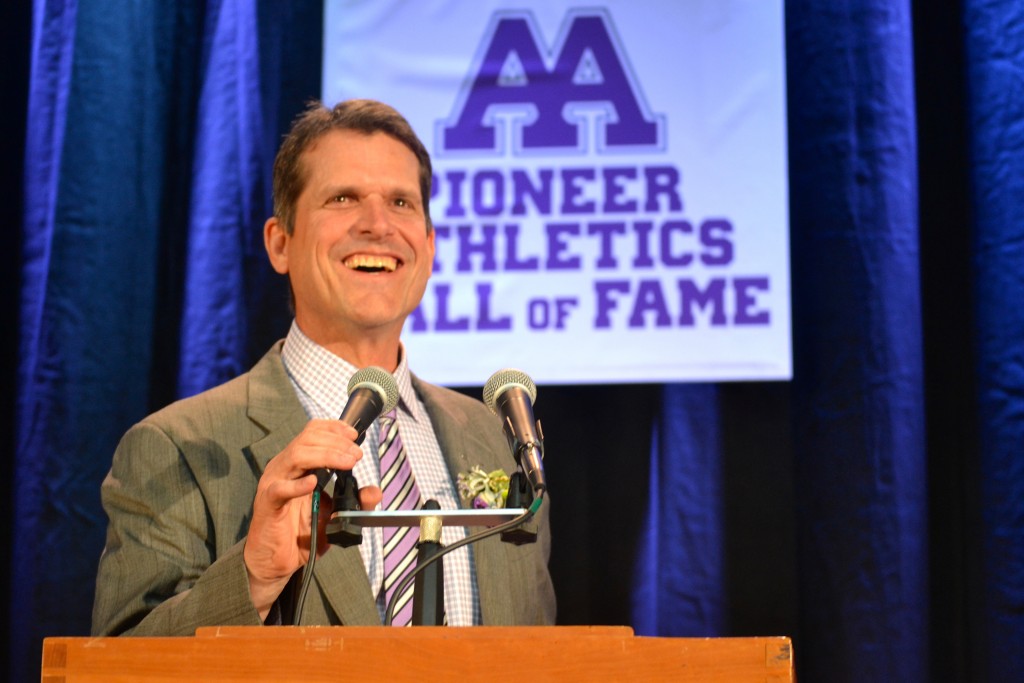 “This is one of the biggest nights in the history of Pioneer athletics,” said Pioneer Athletic Director Eve Claar. “And that’s saying something since the school’s been around since 1856.”

In fact, the last time there was this much talk in Ann Arbor about the Harbaugh brothers, they were facing each other in the 2013 Super Bowl, when John’s Baltimore Ravens narrowly defeated his younger brother’s San Francisco 49’ers by a score of 34-31.

Since then, of course, Jim Harbaugh has become a national phenomenon with his creative, audacious and—most importantly—successful management of the U-M football program.

“It was a great place to grow up and be, and I couldn’t be happier than to be back here,” said Jim, who was Pioneer’s quarterback until his family left Ann Arbor after his sophomore year when his father Jack, an assistant on Bo Schembechler’s staff from 1973 to 1979, left to coach at Stanford.

“This is great to be back where you know you belong; rocking the purple,” said his older brother, John, head coach of the Baltimore Ravens, who played football for Pioneer before graduating in 1980. “I love Pioneer High School.”

Guests included Michigan football players and coaches from past and present, as well as AAPS coaches praised by the brothers from the podium.

As the guests mingled before the banquet catered by Knight’s Restaurant, Rick Leach, Michigan’s starting quarterback from 1975 to 1978 and a former Detroit Tiger, said he heard that the dress code for the night was to be purple and white.

“So I went out and bought this shirt,” he said with a smile, holding the collar of his purple and white checked shirt.

As they were inducted into the Hall of Fame, each brother reminisced about their years playing sports in Ann Arbor.

Jim praised John Nordlinger, former AD at Huron High School, who was his assistant baseball coach when he was in Little League.

He said Nordlinger taught him a lesson he’ll always remember.

“If there was anybody who liked me in this town, it was John Nordlinger,” said Jim, who described himself as “ornery” as a kid. “That man always believed in me and liked me.”

But Jim recalled the time he was called out at home plate, only to be followed that same inning by a teammate who was called safe at home. Jim stood up and shouted about the unfairness of it all, which infuriated Nordlinger.

“It was the only time that Mr. Nordlinger got after me: `You little son-of-a-gun! Who do you think you are? This is about your team. It’s not about you. It’s about the team!’”

Jim said he thought about that quite a while.

John said that Jim was such a good athlete, he could easily keep up with the older guys when they were kids.

“You always had to look over your shoulder with Jim; Jim was always coming,” he said. “What you see now—the creativity, the non-stop work ethic—that’s the way he’s been his whole life.”

At an auction at the end of the evening, John bought Jim’s Pioneer football helmet for $2,000 while Jim bought John’s for $1,000, before each was resold to the crowd. All proceeds benefit the Pioneer Athletic Department.

The brothers tossed signed footballs to some of the former Wolverines in attendance, including John Wangler and Jamie Morris, as well as to quarterback Jake Rudock. Those footballs were then auctioned, as well.

The evening coincided with U-M’s three-day coaching clinic that included John Harbaugh and his Baltimore Ravens staff, who attended the banquet.

The Harbaughs’ mother, Jackie, said she couldn’t thank Pioneer High School enough for the night that honored her sons.

“They had many good experiences at Pioneer High School and many good friends they stayed in touch with their entire lives, so this is a kind of homecoming for them,” she said. “We appreciate everybody in Ann Arbor and the Pioneer community that has put this all together.”

The Pioneer Athletics Hall of Fame has honored 99 former student athletes, coaches, administrators and volunteers since 1999.

Last school year, 48 percent of the PHS student body participated in at least one sport, with 893 student athletes in 32 sports on 61 teams.

“My favorite thing about my Pioneer athletic experience was the ability to not only play multiple sports, but to get an excellent education while doing so,” said Shay, whose dorm room closet at Hope College is largely purple from all her Pioneer gear.

Kai credits much of his success as a swimmer to Hall of Fame coaches Denny and Liz Hill, as well as to Coach Stefanie Kerska.

“As Denny used to say, `Sticks and stones may break my bones, but I’m going to beat the hell out of you,’” he said, to laughter from the crowd.

“Because of both the Hills and Coach Kerska, I now have the privilege of being on the best swim team in the United States,” said the University of Michigan engineering student, a swimmer for U-M.

Each $100 ticket included a fully catered meal from Knight’s, an event T-shirt, a commemorative Hall of Fame sticker & mini football, along with the chance to meet the Harbaughs and their families.

Hall of Fame Chairwoman Lorin Cartwright, who was Pioneer’s athletic director from 1995-2012, says the night could not have happened without dedicated volunteers and a well-oiled committee.

“The event was a fabulous evening to allow John and Jim to come back to the school and see it in a different light,” she said.  “So many of their teammates, coaches and friends we able to attend to make it even more special.  This was a once-in-a-lifetime event for our school and community.”