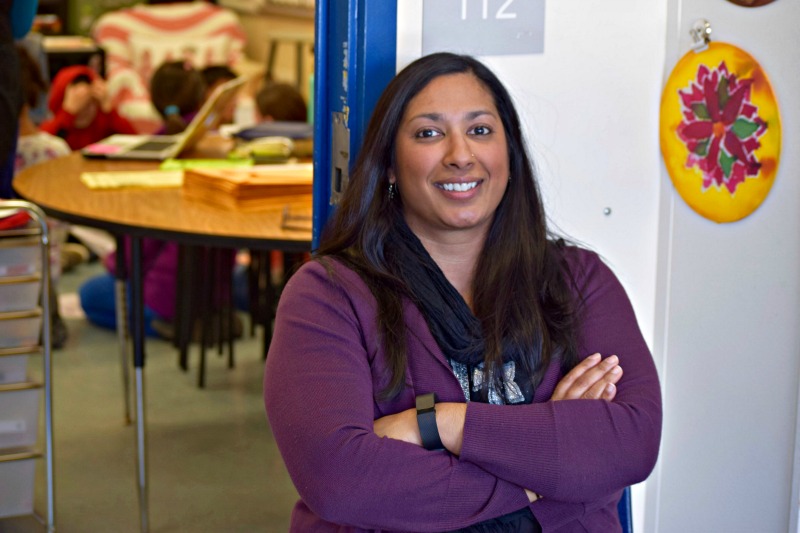 Shah worked at Detroit Country Day Junior School, leading the after school Sundowners program for two years. That’s when she has discovered her passion for teaching and working with students, and decided to move to Washtenaw County to earn her teaching certification at Eastern Michigan University. After student teaching in fourth grade at Lakewood Elementary, she was a substitute teacher for five months before landing a long-term kindergarten position for an open classroom that following fall of 2005.

Shah was hired into the district in 2006 and transferred to King Elementary School where she taught kindergarten for four years before moving to fifth grade, which she has taught for the past six years. During that time, she returned to EMU to earn a master’s degree in art, with a focus on social foundations and a concentration in ecojustice education.

During her time at King Elementary School, Shah has been involved for six years in leading Student Council, which focuses on community service and Michigan Green School initiatives. She has spearheaded the school-wide composting program for the past eight years as well as the King Learning Garden, which is currently in its sixth year of growth. The King Learning Garden acts as a sustainable model for local food production that includes ecological knowledge, cooperative school culture, and an immersion in hands-on learning through garden-based educational concepts.

She has also spearheaded the school-wide composting program for the past eight years as well as the King Learning Garden, which is in its sixth year of growth. The King Learning Garden acts as a sustainable model for local food production that includes ecological knowledge, cooperative school culture, and an immersion in hands-on learning through garden-based educational concepts.

An urban gardener and ecological justice advocate, Shah is passionate about educating and empowering students with knowledge about local and sustainable food systems, community interconnection and collaboration, place-based education and eco-activism. In March she received a Rain Garden Leadership Award from the Environmental Excellence Partnership Program (E2P2) with Washtenaw County for King Elementary School.

In her free time, Shah loves to garden, volunteer, travel, kayak, hang out with her beloved dogs, Chewey and Hermie, and spend time with family and friends.

What do you most remember about being in fifth grade?  I remember my teacher Mr. Gale being someone that was laid back and funny, but caring. It was a lot of fun being in his class. I also loved to write and tried to write crazy stories and enter them into competitions. I always got an honorable mention, but was proud that I had tried. Mostly, I remember loving recess and running! I loved being the second fastest girl in the class at that time. We would race down our neighborhood street right in front of the school since we didn’t have a track. Those were the days when we could do that. It was the same street I grew up on so it was very special to me.

What inspired you to become a teacher?  When I was working at Detroit Country Day, we had a homework club. A student had asked me for some help. Normally, I was outside supervising or helping prepare snacks, but that day I happened to be inside helping. So I sat down with the student who was struggling to understand something. I remember helping him and watching the light bulb go off when it clicked for him. At that moment, I had an epiphany that I wanted to teach.

In your 10 years in AAPS, what’s the most important thing you’ve learned about teaching? About learning?  In my 10 years of teaching in the Ann Arbor Public Schools, the most important thing I’ve learning about teaching is to never underestimate children. They are smart, funny, inspiring, and open to learning. I have learned that being reflective on my teaching practice and working to better myself as a person helps my teaching. I have also learned that there are wonderful support systems out there for teachers, especially my teacher colleagues who are deeply caring. By no means is it an easy job, but it is certainly a rewarding one when you have the best support. I also believe in being a life-long learner. I am always seeking ways to push myself to learn, whether it is to attend professional development, conferences, workshops, volunteer in my community, etc.

Describe an average workday.  An average workday for me is getting to work around 7 a.m. and prepping for my day. I spend time in my morning before school grading, writing learning objectives, reviewing my lesson plans, writing my morning and bell message, writing the schedule for the day, checking my mailbox, saying good morning to my colleagues, making copies if necessary, and getting my game face on. When the bell rings, students are greeted each day. Students come in and read the bell message to know what to expect for the day. They read the learning outcomes and check the schedule, too. Students then usually start math boxes while we wait for safeties to trickle in. We listen to our daily announcements and start our Morning Meetings. We greet one another in various ways depending on the day, share, play an activity, and read the morning message. We transition to math, writing and reading, and before we leave for lunch, several students help with classroom responsibilities. Students usually have a special either in the afternoon or in the morning. We continue studying social studies, science, or health, depending on the day. We wrap up the day with our dismissal routine of cleaning our tables with plant-based cleaner, cleaning up the room, and lining up for dismissal. If we have time, we will have a closing circle or sometimes watch a fun short video for a smile at the end of the day. When the bell rings, I head outside and help with bus duty. I often have a meeting at school or a volunteer meeting with organizations I am part of. If I don’t have a meeting, I organize and tidy up my classroom and get ready for the following day. Often I work in the evenings catching up on emails and planning. 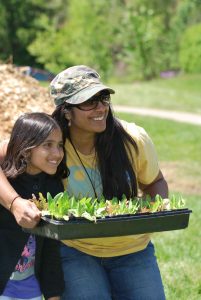 Why are you so committed to the King Learning Garden?  Seeing students enjoy being in our garden, the smile they have when they are helping, and the pure joy it brings really fuels my commitment. The King Learning Garden acts as a sustainable model for local food production that includes ecological knowledge, cooperative school culture, and an immersion in hands-on learning through garden-based educational concepts. I want to make sure our students are exposed to the benefits of nature and afford them the opportunity to learn outside. I know that students learn so much better when they are using all of their senses. Their retainment rate is so much higher when they get to experience the learning first hand. Teaching students about growing their own food empowers them to eat better and know that food tastes delicious when you grow it yourself. We teach students that organic gardening starts with the nourishment of the soil, which eventually leads to the nourishment of the plant and ultimately our bodies. It helps promote the biodiversity of our schoolyard, as well, by bringing in birds, insects, and butterflies. Besides being used to grow food, our gardens are also a great way to beautify our landscape, involve our community, and to bring pride in ownership of our school.

Apps you can’t live without:  Evernote, iTunes U, TED and YouTube.

How do you stay organized? Staying organized is pretty easy for me because of my personality type. I learn best when things aren’t cluttered, so I try really hard to keep my classroom free from clutter. But my desk area is organized chaos. I use digital sticky notes and lots of digital folders all labeled by particular subjects or activities. I usually have a place for everything. I also use a digital calendar to remind me of events and help me to plan. I also make a ton of lists.

What is unique about teaching at King?  I think one unique thing about King is our diverse population. Fifty percent of our families are from Asian decent. There are 48 Asian countries in the world. So our school has many different cultures represented! I love that about our school. 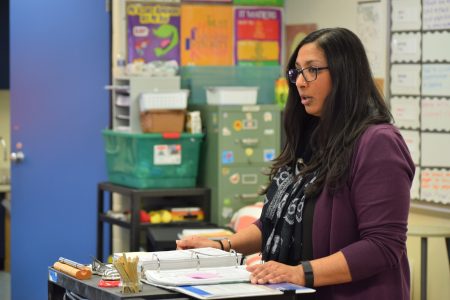 What has surprised you most about the profession?  What has surprised me is how students are often underestimated. They have so much to offer and their voice isn’t heard as much as it should be. Students—especially fifth graders that I have worked with—have really amazing ideas and thoughts. I love pushing their thinking and having meaningful conversations with them.

What do you wish everyone realized about the work of a teacher? I wish everyone realized that teaching is one of the hardest jobs, and that we are undervalued and underpaid. I have had interesting conversations and have read many times that people think teaching is so easy and that we have breaks and our summers off. I actually work 50-60 hours most weeks grading, planning, analyzing data, having meetings, spending my lunchtime helping students, running programs, and the list goes one. I never really stop working during the summer either. Sure, I get “breaks,” but I never stop thinking about my job. I am always reflecting and seeking new and innovative things to do with students so it is meaningful and fun for them to learn.

What would you tell a college student considering becoming a teacher? I’d say “Run for the hills!” Just kidding! I would tell a college student that this profession isn’t for everyone, but if it is for you, it is the best job in the world. You get to work with dedicated teachers who care deeply about educating people so they have the tools to be successful and happy people. You get to bond with students you will think about year after year as you reflect on your time in the classroom. I would also tell them that it is so important to take care of yourself, have a great support system, and spend quality time getting to know your students.

What’s most exciting about your personal life right now? My partner and I are fostering a sweet pit bull named Moët. I call her Momo for short. She is a sweet, snuggly, and wonderful addition to our family.