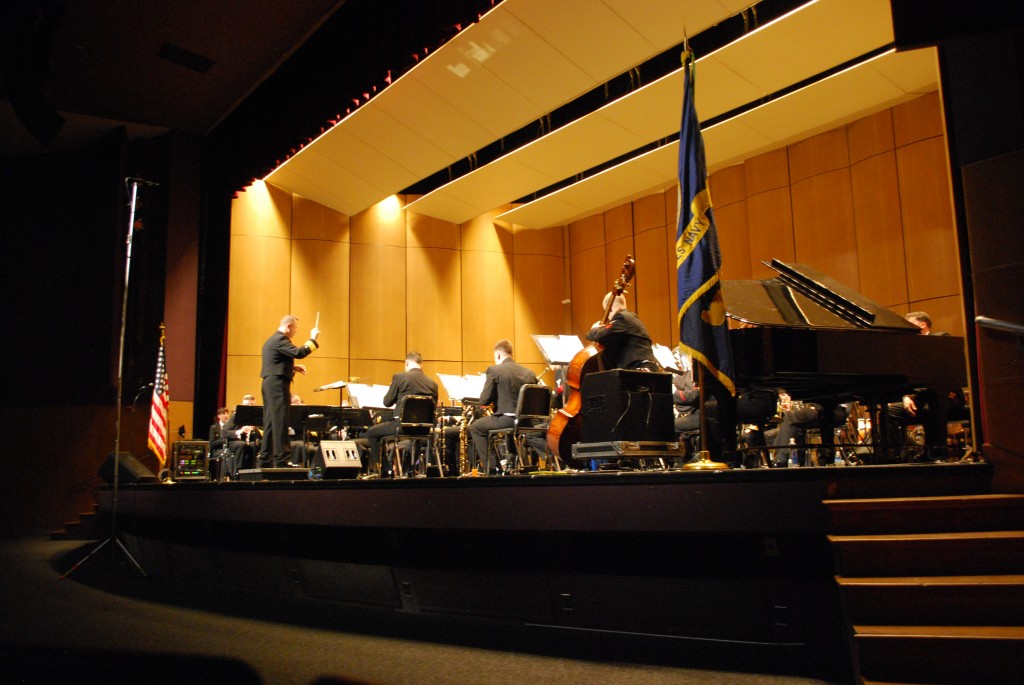 The U.S. Navy Band, widely considered one of the best in the world, honored Pioneer High School with a free two-hour performance to a full house on Saturday, March 10.

The band regaled the audience with a selection of patriotic marches, Cole Porter songs and Russian compositions.

The Navy Band rarely performs in high school auditoriums, and Band Director David Leach was integral in getting the band to perform at Pioneer, which is renowned for its Grammy-winning music program.

“I try to tell my students the fact that this caliber of musician is not just a good college musician. These are unbelievable college musicians,” he said after the performance. “I want my kids to see firsthand. And they were all awestruck.”

Particularly awestruck were ten Pioneer students who got the chance to play along with the Navy band in the “Washington Post” march by John Philip Sousa.

“Playing with some of the best horn players in the world can be a little nerve-wracking,” said senior Kevin Flanagan, a Pioneer French horn player.

Senior Bo Peng agreed. “When we started, I didn’t play the first note, because I was afraid I was going to mess up,” he admitted. Peng, a trombone player, is heading off to the Naval Academy this summer. He hopes to be a part of the academy band along with his other aspirations.

Ruby Emberling, a junior trumpet player, said she was nervous walking onstage, but the world-class musicians were friendly and encouraging, so she was able to focus on the performance. “It was amazing, just sitting next to them and hearing how great they sounded,” she said.

The other students who performed with the Navy Band were senior Natalie Martin on the flute, senior Kevin Zhang on the clarinet, sophomore Eliot Polot on the euphonium, senior Mario Sulaksana on the tuba, junior Tyler Leach on the trumpet, junior Norah Rast on the oboe and senior Takeo Cauley on the alto saxophone.

The audience was also treated to solos by vocalist Yolanda Pelzer and University of Michigan graduate and saxophonist Jonathan Yanik, who awed the crowd with a breathtakingly fast solo in “Introduction and Rondo Capriccioso” by Camille Saint-Saens.

Take a listen to the audio slideshow below to hear selections from the evening, including the march the Pioneer students played with the Navy Band.