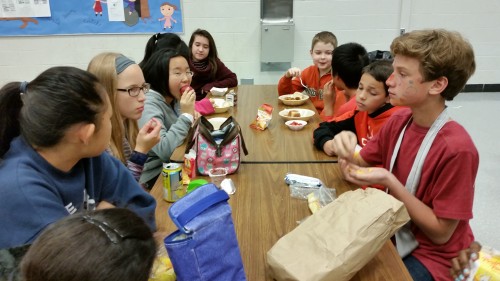 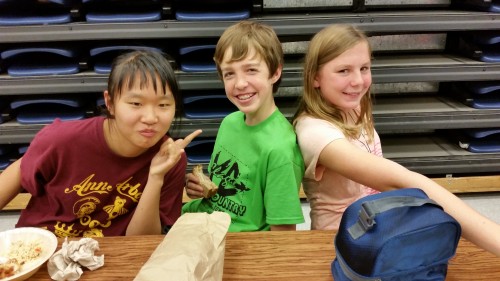 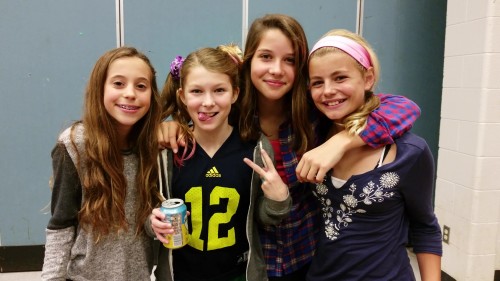 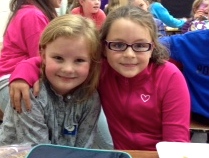 At the start of Mix It Up At Lunch Day, the two Wines Elementary third graders pictured directly above started chatting.

As she walked about the cafeteria with her camera, teacher Kelly Boone thought the two girls—Heather (in pink) and Poppy—were already friends because they seemed so comfortable with each other.

Later, Boone learned they had only spoken a few times on the bus and said, “Hi” in the hall. “Now they feel like they know each other a lot better,” Boone said.

Mix it Up At Lunch Day is a national campaign launched by Teaching Tolerance a decade ago to encourage students to move out of their comfort zones and connect with someone new during lunch.

Clague Middle School holds Mix It Up At Lunch Day every year. At Clague, each student was asked to write down four facts about himself or herself, one of which was not true. Students took turns reading his or her list aloud, as others guessed which fact was not true.

Teacher Jeff Gaynor said the middle schoolers have mixed feelings about Mix It Up at Lunch Day because they don’t want to be separated from their friends.

“But one surprised us afterwards by saying, “`I never knew there were so many nice kids in 7th grade,’” he said.

Gaynor said research shows that the cafeteria is the place where divisions among students are most clearly drawn, so when students interact with those who are different from them, biases and misperceptions are reduced.