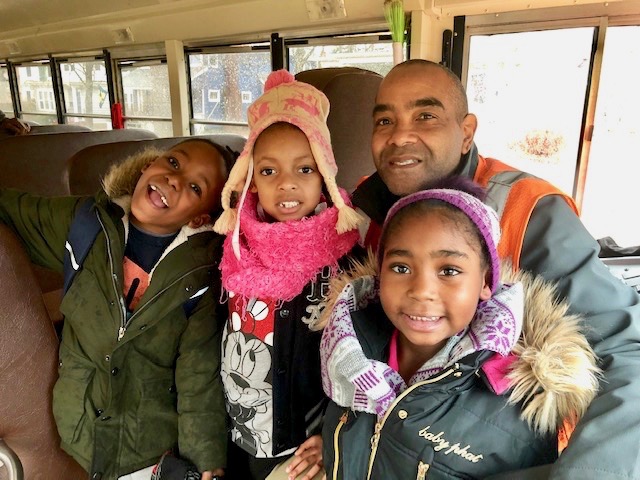 When AAPS bus driver Robert Edwards was a basketball referee in California years ago, he would sometimes stop the game to help a crazed coach calm down.

He’d remind him that cursing was not allowed; that the kids deserved better; that the court is an extension of the classroom.

“I’d tell them, `You have a great opportunity to have a positive impact on these kids,’” said Edwards, a healthcare finance retiree who is in his third year driving a bus for Durham School Services, which provides bus transportation for AAPS. “I think it takes a village to raise these kids and if we all engage with them and do our part, we can have positive outcomes.”

Edwards says his experience as a coach, foster parent, and parent of three has helped him relate to the students he drops off and picks up from Burns Park and Huron High every school day.

Burns Park Assistant Principal Laura Wolf says all that experience and wisdom benefit the students he transports from sites furthest from school.

“Robert has built relationships with these students,” she says.  “He connects with them, looks out for their best interest, and is an amazing person.”

She says he helped her determine who needs gloves or hats and has offered to get some if needed. And Just before winter break, he brought wrapped presents for each of his 14 riders.

“One of the students was so excited to get Kinetic Sand—something he had never had before,” she noted. 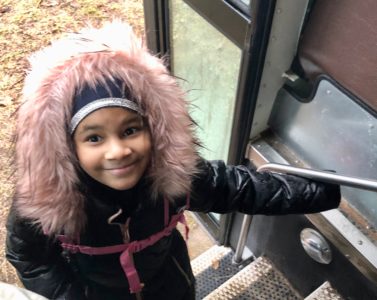 Many people have no idea what a difficult job it is to drive a school bus, said Ed Gallagher, general manager of Durham School Services-Ann Arbor.

“Safely driving a vehicle the size of a bus and all the while maintaining a safe, pleasant environment on the bus is not easy,” he said.  “Bus drivers are definitely underappreciated. A good driver can be such a mentor in a student’s life.”

He said drivers such as Edwards take an active and sincere interest in the students’ achievements and well-being, and students often come to them for guidance or just someone to talk to.

“They can and often do have and leave a positive, lasting effect on the students they transport,” he said.

Durham School Services-Ann Arbor employs about 130 drivers for the 113 general education and special needs routes and numerous field trips that are covered every day. This includes drivers who do their same route every day and drivers who are considered casual drivers or sub drivers who only work certain days or certain shifts and fill in for drivers who are off for whatever reason. 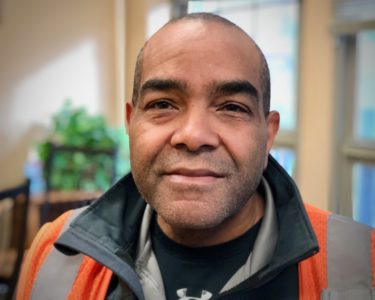 Edwards was born and raised in Ypsilanti, graduated from Belleville High, attended college in Chicago, and kept heading west until he discovered the San Francisco Bay area. He lived there for 30 years, raising three children, working in healthcare finance, being a foster parent, and serving as a sports official.

He moved to Alabama in 2015 to work on his 93-year-old father’s cattle and horse ranch and then moved back to his hometown of Ypsilanti.  So now he’s an Alabama cowboy in the summer and during winter breaks, and a bus driver during the school year.

He agreed to become a driver because he liked the part-time hours and hourly salary. But he quickly came to love it because of the kids.

“This is a great opportunity to have a positive impact on these kids on a daily basis,” said Edwards.  “Buses, in essence, are an extension of the classroom, and the kids understand that.  So when I communicate with them, I talk to them about just about everything under the sun. If I know they have specific issues going on, we talk about it and try to put them in a situation where they can succeed.”

He sometimes talks to kids about healthy lifestyle choices—from flossing to choosing water over a soft drink.

Relationship therapy and doses of encouragement

Burns Park and Huron are new routes for Edwards this year, and he noticed at the beginning of the year that despite the presence of a monitor to help keep the elementary kids in their seats while he drove, they were testing their limits.

“I tell them that my Number One job is to transport them to school safely,” he says. “You can have fun, but Safety is Number One. They understand, and they respond.” 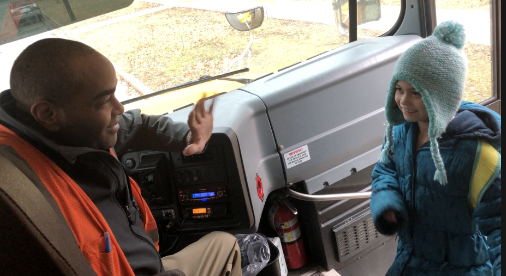 “These kids are precious, and we need to take the time to really get to know them. They can tell if you’re just putting on a front, or if you really do care.  But when they get to know you, they learn to respect you and they understand that you know what? This guy is really nice. He talks to me about things I want to talk about. We have parties on the bus. He lets us listen to music. And all he wants you to do is follow the rules.  if you do things for them, they’ll do things for you.”

He recalls two students who didn’t get along in their neighborhood who took the feud onto the bus. After a parent approached him about it, he talked to both students about the importance of getting along.  “And then I took the aggressor and we sat down and had a long talk about how to interact with people; the way to communicate when you have a conflict with someone and here are the tools you can use,” he said. “I take pride in the fact that they started getting along with each other and became friends.”

In addition to his consecutive Huron and Burns Park routes, he drives an after-school route at Tappan.  If there’s a basketball game at Tappan,  he’ll usually go inside and watch.

After one game in which the Tappan team lost,  he noticed one boy who was particularly sad about it.

“I said, `Keep your head up! You got so many more games ahead of you. This is just one game. You’re learning about how to interact with the opposition and the coach and the officials. You’re out there having fun and getting good exercise. So keep your head up. You have a bright future ahead of you.”

Edwards is always mindful to encourage them when they need it.