When Jane Landefeld wakes up tomorrow, it will be the first time in 40 years she will not have a role to fill within Ann Arbor Public Schools.

Landefeld is retiring as the Executive Director of Student Accounting and Research Services, a job that has kept her immersed in data and in frequent contact with parents seeking the best fit for their children in an Ann Arbor Public School.

At a farewell reception at the Balas Administration Building last week, trustee Christine Stead said the School Board consistently counted on Landefeld to get the data right.

Looking in the direction of Landefeld’s four grandchildren, Stead added: “We have enormous confidence as a whole system because of your grandma’s hard work and what she does every day. She’s brilliant, hard working, and very calm in the face of—sometimes—adversity.”

Landefeld’s primary job has been collecting and presenting the data needed by the state of Michigan, building principals, and trustees.

Board President Deb Mexicotte quipped that she was always reassured to look over and see Landefeld nodding in agreement at a piece of data she’d cited.

And at a recent Instructional Council, one principal after another took the microphone to say how much they have appreciated not only Landefeld’s knowledge of important data, but her willingness to take the time to help them understand and apply it. 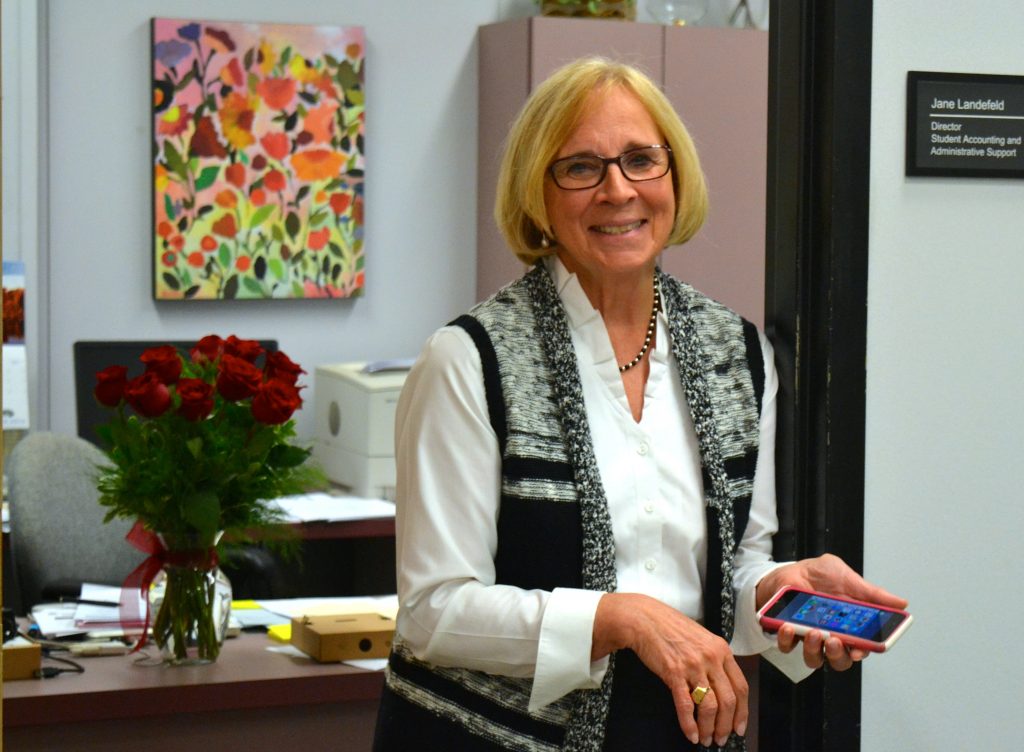 That eagerness to help—and to take one phone call after another from someone seeking a specific piece of information—is one of the reasons Landefeld took work home with her every night.

To Landefeld, customer service is key.

“I’m really a people person who understands data,” says Landefeld, sitting in her bright and colorful office at Balas.   “I love helping people; seeing that light bulb turn on; feeling I’ve made a difference.”

She has worn multiple hats at AAPS, the most important being data and enrollment. In the past several years, her days have included fielding many phone calls from families interested in Schools of Choice.

“There’s always more to do,” she says. “That’s the most challenging part of the job. We have a lot of templates in place, and still every year I want to do something different. I say, `I think we can add this one more thing.’ For me, that’s what its all about; to continue to grow; to continue to increase skillsets for not just me but for other people because of what I can provide for them in the data.”

The fifth of nine children, Landefeld grew up in southeastern Ohio. After living in several cities with her former husband, she moved to Ann Arbor in 1976 when he got a job at the University of Michigan. Landefeld started volunteering right away at Northside Elementary, her neighborhood school. Volunteer work turned into paid part-time.

After decades with the district, Landefeld believes the time has come to step down.

In fact, she considered leaving in June, but agreed to help get the new year started.

When asked what she’ll miss most, Landefeld doesn’t hesitate.

She’s not sure yet how she’ll spend her days.

“I don’t want to sit around doing Sudoku and crossword puzzles,” she says with a smile. “I want to do more than that, but I don’t know what that would be. We’ll see.”

Landefeld does know she’ll spend more time with her children and grandchildren, as well as family back in Ohio. Landefeld has two sons: Douglas, who lives with his wife and three children in Livonia, and Joshua, who recently moved to Ann Arbor with his wife and daughter, Emy, a first grader at Logan Elementary.

The Landefeld family was there as she said goodbye to some of her many friends and co-workers last week.

“I can’t tell you how fortunate I think I am that I got to work among all of you all of these years and learn from you and help you,” she said at her farewell reception. “I will miss this in so many ways.”