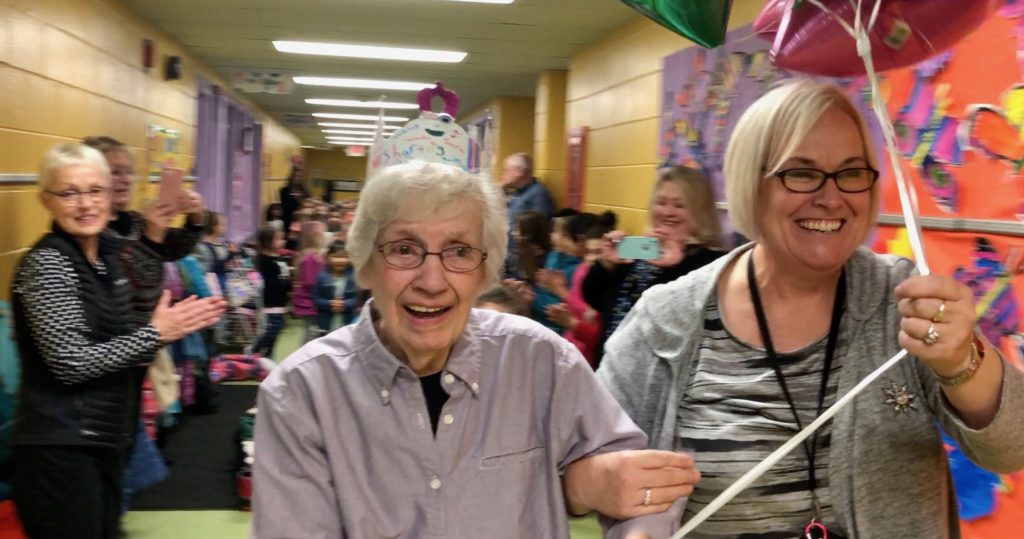 Ginny Hartog turns 90 in a few days. And what better way to celebrate than by walking through the halls of Lawton Elementary as students applaud and wish her well?

Hartog has been volunteering at Lawton once or twice a week for 25 years.  Once a week she helps Jinx Cook’s fourth graders become better readers, and once a week she reads to the students in Jenny Szalay’s kindergarten class. 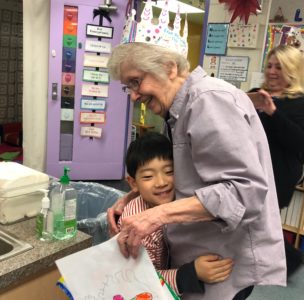 “It’s fun!” says Hartog, when asked for the bottom-line reason she’s been helping children with their reading for so long.

Jinx Cooke says she’s not sure what she’d do without her, but she knows she wouldn’t laugh as much as she does one afternoon a week.

“Children feel comfortable with her like they might with their own grandmother,” says Cooke, whose students benefit from Hartog’s weekly tutelage. “The children know that Ginny cares about them and that they can ask her anything.” 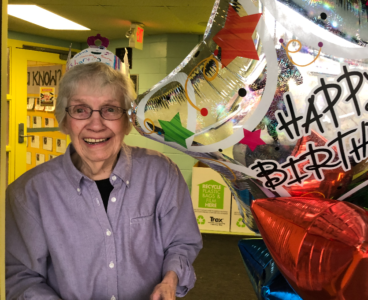 Hartog says part of the fun is simply hearing the funny things the little ones say to her.

“Is she going to die?” asked a student, who assumed that her last day in the classroom meant her Last Day on Earth.

She’s also been asked: When were you born? Why were you born? Have you ever been married? Why are you divorced? Mrs. Hartog, did you know you’re old?  And (pointing to a vein on her hand): What is that? It looks like a worm.

Cooke says Ginny is a walking dictionary and geography expert who is known for her ability to correctly use even the trickiest punctuation. In 25 years, Cooke can recall just two times she was asked a punctuation question she couldn’t answer until she did a bit of research.

“Each year, there is at least one child who actively seeks the opportunity to read with Ginny each time she comes to help in the classroom,” says Cooke. “Many years, Ginny works with a reluctant reader who wants to continue reading long after their time is up. Ginny doesn’t give the students stickers or candy. She shares exactly what the children want, which is her undivided attention.”

“When Ginny’s here, they come right up and ask: `Can I read with Mrs. Hartog today?” 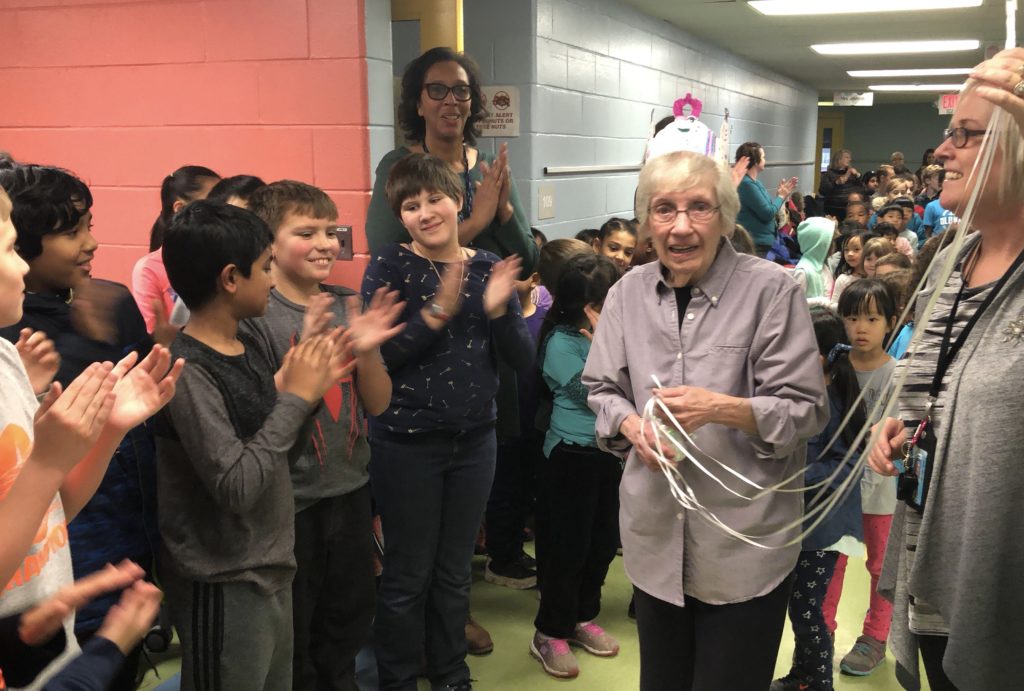 Hartog, a North Dakota native who has lived in Ann Arbor about 60 years, retired as a histology technician from the V.A. Hospital when she was 65.

“I knew I had to do something,” she recalls. “My little great nieces at the same said, `Ginny! Go read to kids. You’re good at it.’”

She attended a volunteer information meeting at Catholic Social Services on a Thursday. On Friday, someone called her and asked if she would like to read to children at Lawton.  She started the next week. That was 25 years ago. 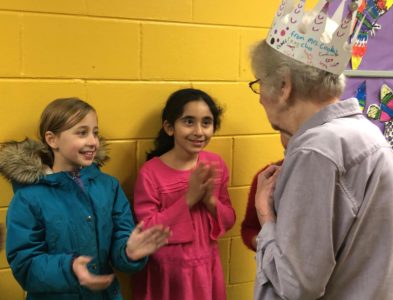 Cooke admires Hartog’s ability to bring out the best in every child and teacher.

“There have been countless days when I have faced a seemingly overwhelming challenge until Ginny arrived and made me laugh,” she says. “She is belly laugh funny! And the same thing happens in Jenny’s room.”

Hartog is in excellent health.  She lives alone in an apartment near Vet’s Park, and is completely self-sufficient.  In fact, although she’s slowed down a bit, she doesn’t feel much different at 90 than she did 10 years ago.

“You don’t have too many friends left when you turn 90, though,” she says. “They all went bye-bye a while ago.”

Her nieces, Sarah Ercolani and Elizabeth Houston, who each attended Lawton years ago, were on hand for Thursday’s school-wide parade.

They admire their aunt’s wit, warmth and spirit.

“She can talk about anything and knows everything!” said Ercolani, as Houston agreed.

How much longer will Hartog continue to volunteer at Lawton?

“Don’t leave me here, Ginny!” says Cooke, whose 29-year-old daughter was read to by Hartog when she was in kindergarten.

“She says that every year,” says Hartog with a smile. “I don’t know.  I keep wondering about that, too. Well, as long as I can drive.”

Without missing a beat, Cooke responds: “I’ll come and get you!”