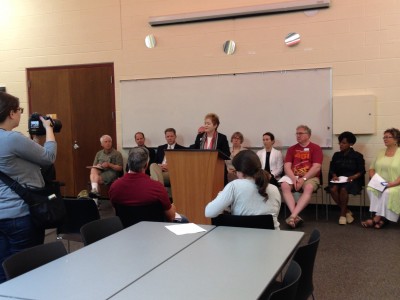 Today, public school districts from across Washtenaw County held a press conference to share their disdain with yet another year of continued underfunding of public education.

“It is shameful,” said Dr. Jeanice K. Swift, Superintendent of the Ann Arbor Public Schools. “This proposal unfairly impacts communities across the state of Michigan, such as Ann Arbor, who have made investment of tax dollars through property taxes, millages and Sinking Funds to support children. It is time to call a ‘time out’ on our Legislators. Shame on the state. We are better than this. We need to do more for our children. Our story in Ann Arbor and across Washtenaw County is devastating.”

The proposal for the State School Aid Fund has been back and forth in conference committee and expected to be voted on today. The current proposal gives a $175 per student increase for base-funded districts across the state as well as a full $175 increase for Cyber online schools. Charter Schools will receive an increase of $83 per pupil. BUT for over 130 districts, such as the Ann Arbor Public Schools, the proposal only provides a $50 increase in per pupil funding.  In addition, the current bill contains other detrimental impacts to the overall K-12 funding picture including in retirement costs. The bill will continue to be a pull down mechanism on public education and continue the shell game of “giving” districts money in the foundation allowance with a number of hidden costs negatively impacting school districts across the state.

This proposal will continue the erosion of quality public education across the state of Michigan. Michigan educational outcomes continue to show signs of deterioration. The most recent Ed Week Quality Counts national data analysis ranks Michigan as the 42nd state in overall K-12 achievement.

Under this current proposal, 5 of 9 Washtenaw County School Districts would receive the $50 minimum increase. This proposal unfairly impacts districts that have consistently voted to invest local tax dollars in support of children.

“Clearly, a decade of reductions has yielded devastating impacts to the levels of quality we are able to offer to our Michigan students and to our Washtenaw County children,” said Dr. Swift.

At the press conference Washtenaw County and Ypsilanti Area Schools Superintendent Scott Menzel, Chelsea Superintendent Andy Ingall, Dexter Superintendent Dr. Chris Timmis along with Dr. Swift and members of the Ann Arbor Public Schools Board of Education all spoke of their frustration of the blatant lack of support from Lansing and the Legislature.

Ann Arbor Public Schools Assistant Superintendent for Finance, Marios Demetriou stated that the proposed AAPS 2014/2015 budget, which the Board of Education will be voting on tonight at the Wednesday, June 11th’s meeting, will be negatively impacted by this proposal now being presented at the state. Public Schools in Michigan are required to have a balanced budget by June 30. Today’s last minute vote by the Legislature causes districts across the state to scramble to achieve a balanced budget. Ann Arbor based the 2014/2015 budget on the Governor’s projection, which would have continued to have Ann Arbor in a reduction mode of about $11 million. With this new proposal Ann Arbor will see another $2.5 million in reductions that have not yet been factored into the proposed plan.

“The Governor’s proposed School Fund budget called for an $83 per pupil increase. The funding up for today’s vote calls for a $50 per pupil increase for Ann Arbor. That is a $388,000 reduction,” said Demetriou. “ Best practice incentive funding has been reduced by $2 per pupil creating a $35,000 reduction. And several requirements have been added to “best practice” funding which will make AAPS ineligible adding another $850,000 lose to next year’s budget.”  Demetriou added that the increase in the MSPERS retirement fund to 25.78% contribution will cost Ann Arbor an estimated $1.3 million. The total impact to the AAPS budget is another $2,573,000 in reductions. 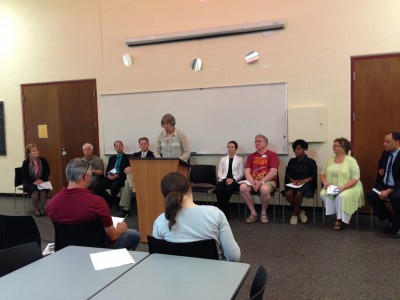 “AAPS has not had time to react to these devastating reductions,” said AAPS Board President Deb Mexicotte. “For the past 11 years during my tenure on this board, every year AAPS has had a $6-7 million deficit that we have had to address under Proposal A. AAPS and surrounding districts contribute to the state larger and larger amounts of our local tax dollars which are not returned to us. I have used the word ‘shameful’ at the board table and now I can only use that word again with more anger,” stated Ms. Mexicotte. 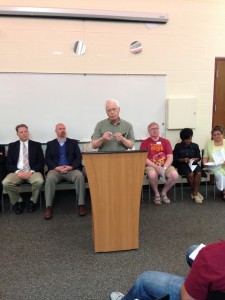 Glenn Nelson, Treasurer of the Board of Education stated, “The state continues to give a lower and lower priority to education.”  Vice President Christine Stead added, “Our hope is we will take this opportunity to change the law. This is broken.” While Trustee Irene Patalan proclaimed, “What a shameful mess. I want everyone in Lansing to stand with a heart and soul for the education of all students.”  Trustee Simone Lightfoot put out a challenge, “I will continue to encourage that we take suit against the state. Doing what we have been doing, following the rules, is not working.”

As the Ann Arbor Public Schools closes another school year and embarks on the new school year, our commitment to the education of our students is demonstrated in the new initiatives such as the Pathways to Success Campus, the STEAM at Northside program, World Language initiatives, technology infusion and the International Baccalaureate corridor. While the state continues to erode public education, AAPS will continue to be vocal supporters of what is right for all our students and demand change in Lansing.