For the past 10 days, 16 visiting educators from Singapore have been welcomed at one AAPS school after another, just as AAPS staff were received when they visited Singapore this summer.

So as the Toyota Education Initiatives in STEAM Innovation program comes to a close, just what do the Singaporeans think about what they’ve seen?

On their final full day in Ann Arbor, the educators praised the district’s passion for teaching, commitment to inclusiveness and individualized instruction, and sense of community.

Saminathan Gopal, a principal at STEM Inc. Science Centre of Singapore, said he returns to his country with many memories.

“There are so many colorful things here!” he said. “The people. The food. Even the white snow for me is very colorful.”

He said everyone works “as if it’s a calling.”

“I like the community spirit – I can see you all care about each other,” he said. “Everywhere I go, the principals are trying to build a strong culture. And everyone is having fun doing it, including the teachers and students.”

Wilber Lim, director of physics at a secondary school in Singapore, is no stranger to the U.S. or its educational system. Although this was his first trip to Michigan, he was a graduate student at Yale University 10 years ago.

Still, he said he was impressed with the way AAPS tries to accommodate individual needs of students.

“You have a highly customizable school system,” said Lim, before posing for a group shot last week at the Board of Education meeting. “Every school is unique. Very unique. So I want to give myself more time to explore the schools, and figure out what makes all these schools tick, and

“I see a lot of passionate teachers who are committed to STEAM,” he said.

This kind of mainstreaming is not seen in Singapore, where students after sixth grade are sent on various courses according to their perceived talents and abilities based on an examination. Only the students’ first six years of school are compulsory.

On this, her first trip to the U.S., administrator Fiona Koh said she admires the way the district is a microcosm of the community, and that schools employ social workers, psychologists, and teacher assistants.

“It was heart-warming to see how well students interacted with the other students, and how they tried to bring them in,” she said, referring to special education classes. “That was good.”

She said that a noticeable difference between the two educational systems is the diversity in the schools.

“Students with different needs and interests go to different schools, like the open public school (Ann Arbor Open) and Community High School versus Skyline. They try to personalize and customize their learning. That’s something I deeply appreciate.”

Koh said she also admires how schools complement each other, siting the fact that students from the comprehensive high schools can join the Community High School Jazz Band.

Singaporean robotics teacher Roy Teo said he sensed that students here really enjoy being in the classroom, and that in Singapore, many teachers are there only because it’s their job.

“But here, I found teachers love to teach, and they also mentor their students,” he said, adding that he often heard Ann Arbor teachers interacting with students in the hallways, asking how they’re doing, or if they’d turned in a certain application.” “They’re well connected with their students, as I could see from their spontaneous reactions,” he said.

Chow Weisi, a secondary school principal, noted the importance of parental involvement and sited a father he talked to at the A2STEAM at Northside expo who was so supportive of his son’s education.

“The students are very confident,” he said, noting that it helps when parents use the language of STEAM at home, and when there is so much teacher-student interaction after school as well.

Weisi said teachers here are obviously passionate about their work, and have no problem saying they’re still learning as well.

Skyline High School math teacher Laurie Hochrein, who was among the group that went to Singapore in July, was at Pioneer High School Wednesday morning to say goodbye.

She said her trip to Singapore was inspiring.

“It was nice to see a well-oiled machine,” she said. “Everything over there has its place, and it was nice to see their focus and meaningful missions. I appreciate the fact that they have such purpose behind everything they do, and they do a lot of research and it’s not happenstance. And they’re always trying to improve. They don’t get set in their ways.”

Hochrein said the program—officially called Toyota Education Initiatives in STEAM Innovation—benefits AAPS because of the exchange of ideas.

“We get to see perspectives outside of our own geographical area, and find other things that are working in education,” she said. “Just to be able to share those ideas is pretty amazing.”

The Singaporeans are scheduled to depart from Detroit Metropolitan Airport Thursday afternoon. 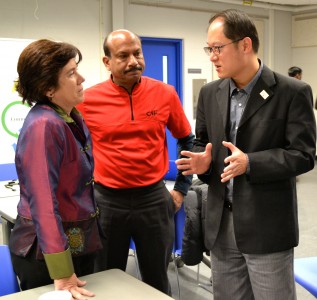