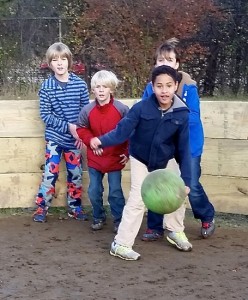 So much so, in fact, that they raised money to build two new gaga pits at the school, which are quickly filled come recess.

“They love it!” said playground supervisor Hunter Brow, noting that the game is not only lots of fun, but it’s less competitive and injury-prone than other activities.

Gaga (“Touch-touch” in Hebrew) is believed to have originated in Israel and is a variant of dodge ball. It involves dodging and running around inside the pit, while trying to hit opponents with a ball below the knee.

The kids raised the money by soliciting pledges for their participation in the school’s annual Run-a-Thon.

“Lots of kids at our school attend Camp Al-gon-Quain or Camp Birkett where gaga is quite popular,” said Principal David DeYoung. “So they’ve been talking for a couple years about bringing it to Wines.”

DeYoung said it’s going great so far, with 50 or more kids at each pit during lunch recess, half of whom watch and cheer from behind the pit til it’s their turn.

The fast-paced game can be played by a group of players or with teams, as well as one-on-one.

“The games generally last less than five minutes, so we can cycle through lots of games in a short amount of time,” DeYoung said. “In my last newsletter, I wrote how gaga is the great equalizer on the playground as anyone can have success playing. It requires no previously learned skills or any specific talents.”

Brow said the only downside of the game is that the students’ feet can get muddy. A few of the children wore rubber boots apparently reserved for recess.

Not to be left out of the fun, the Wines staff this week stepped into the pit for a game of gaga so they now know firsthand what the fuss is all about. 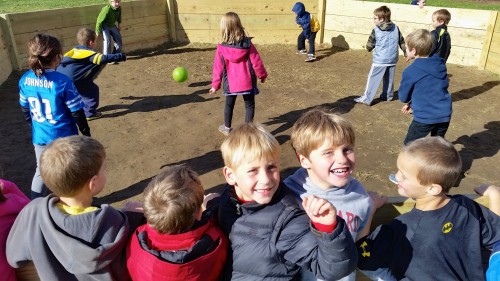 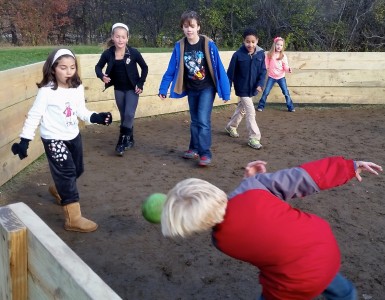 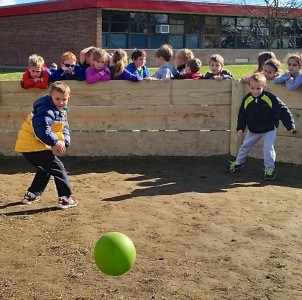