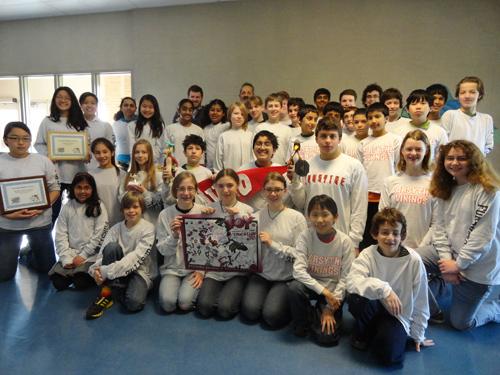 The Viking team of 39 sixth, seventh, and eighth graders scored 1729 out of a perfect score of 2000, far above the national average. Second place in Michigan went to Dunckel Middle School, Farmington Hills, with a score of 1707, and third place went to Boulan Park Middle School, in Troy, with 1700. A team from Tappan finished seventh in Michigan, and we are glad to see our crosstown rivals return to KMO competition.

Nationally, Forsythe placed sixth out of 565 teams. First place in the country was Longfellow School from Falls Church, Virginia, with 1814, and second place was Kealing Middle School from Austin, Texas with 1799.  The competition consisted of 200 multiple-choice questions, each with five answer choices.  Forsythe answered 184 correctly on the first try and got 14 of the remaining 16 right on the second try, leaving only two questions answered incorrectly.

KMO is a middle school club open to all Forsythe students. The coach is Dan Ezekiel, assisted by Mike Shaw, and with parent assistance coordinated by team mom Marni Arnett.  The club is now finished for the year, but will meet again next school year during Quarters 2 and 3.  The members of the gold-winning April team were:

A substantial gift from IMRA America to the AAPS Educational Foundation will support math and science programs in the Ann Arbor Public Schools for the 2010-11 year. […]

After 15 years, TA Ann Mooney is retiring from the Ann Arbor Public Schools. Mooney worked half-time first at Haisley and then at Lawton Elementary. A social worker, she spent much of her time in […]