Annette Ferguson’s strong sense of community is a main reason she was selected this fall as the Business Partnerships Coordinator for the Ann Arbor Public Schools.

She is focused on building relationships with area businesses and related groups and will work closely with the Ann Arbor Public Schools Educational Foundation in the work that it does to garner support for the district. School officials have called this outreach effort important to building bridges in the community.

“We are pleased to have Annette on board,” said Director of Communications Liz Margolis, who oversees the partnerships office. “She has many connections in the community and has a strong sense of what we want to see in this position. 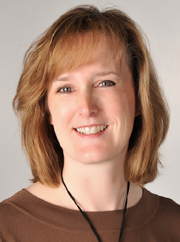 “In addition to being experienced in the business and marketing area, she also brings a solid knowledge of our district and the community. That will be important as we move ahead.”

Ferguson replaces Norma McCuiston, former community partnerships and projects coordinator, who retired earlier this year, but the job Ferguson is doing has been restructured.

The school district has had a partnerships office for 25 years and many relationships are already in place that Ferguson will build upon. The volunteer coordination done formerly in the office is also being restructured and will be handled separately, Margolis said.

Not only is Ferguson an Ann Arbor parent, but she also is a product of the Ann Arbor Public Schools, having attended Carpenter Elementary, Scarlett Middle School and graduating from Huron High School. She and her family moved to Ohio for a time, returning when her husband, Rob, took a job at the University of Michigan. The two just celebrated 17 years of marriage.

She comes from a family of four children, with two younger siblings – a brother in Saline and sister in Ohio – and also has an identical twin sister who lives in Wisconsin. Her mom and dad still live in the area and she said a lot of her approach comes from their influence. “They led by example,” she said. “And that meant a lot of volunteerism.”

In addition to volunteering in her children’s schools, Ferguson has been involved with the Washtenaw Elementary Science Olympiad and is just completing two years of service on the Pittsfield Township Board of Trustees.

“It goes back to my sense of building community,” she said. “Schools are a key component. We need to bring the community and schools together in tangible ways that enhance the experience for both.”

Ferguson started her post with the district on Nov. 8 after working at Direct Incorporation of Ann Arbor, assisting companies with trademark searches and research for forming businesses. She previously worked in the advertising business.

She has been working on a new strategy and approach for the partnerships office, speaking with building principals to determine their needs and beginning to meet with partners in the community. Her role will include connecting local businesses directly with Ann Arbor schools for a variety of opportunities at all levels. That can mean anything from internships out in the community to business involvement in the classroom.

“The partnerships are a two-way street,” she added. “It’s a balance to find out what the partners need, what the schools need and how it fits together.”

She is meeting weekly regularly with Wendy Correll, executive director of the AAPS Educational Foundation, so they can discuss how to best coordinate their efforts and outreach. Correll said the revamped partnerships position will strengthen the public education message in Ann Arbor and build bridges between public and private sectors. She noted that the district’s Strategic Plan makes an expanded partnership program a priority.

“just as private giving is part of a solution to funding issues in K-12 programs, business partnerships are important, as well,” Correll said, noting that local businesses bring myriad experiences directly to Ann Arbor classrooms and through workplace internships for students.

“I look forward to working with Annette to develop an expanded resource pool,” she added. “This will support student achievement and talent development in the Ann Arbor Public Schools.”

Ferguson said although the partnerships will have tangible results, she expects other, less tangible benefits, as well.

“Students will see businesses investing in their community and will see and experience firsthand the benefits of volunteerism,” she said. “She noted that learning opportunities of this type can have a profound impact on how students, in turn, relate to their community.
On a personal note, Ferguson said she feels that her experiences in marketing, community service and school activities have brought her to this place with the school system. “I do feel all the pieces of my life are converging in this undertaking,” she added.

Occupation: Business Partnerships Coordinator for the Ann Arbor Public Schools.
Residence: Pittsfield Township. She is a product of the school district, having graduated from Huron High School, and she also attended Carpenter Elementary School and Scarlett Middle School.
Education: Bachelor’s degree in Advertising from Michigan State University.
Age: 44
Family: Married 17 years to Rob, an occupational therapist at the University of Michigan Health System. They have three sons: a third-grader at Carpenter Elementary School and sixth- and eighth-graders at Scarlett Middle School. She is one of four children and her parents still live in the area.
Pets: They have a Bichon poodle named Herbie.
Hobbies: She enjoys reading, gardening and bicycling with her family.
Community service: Is just completing two years as a member on the Pittsfield Township Board of Trustees and has been a longtime volunteer in her children’s schools. Was also active with the Washtenaw Elementary Science Olympiad.
Favorite meal: “Fresh garden green beans and squash – there’s nothing like fresh garden produce.”.
Last books read: She took her cue from Ellen Daniel, a teacher at Scarlett Middle School, who recommended a list. She has read “Water for Elephants,” by Sara Gruen and “The Girl with the Dragon Tattoo,” by Stieg Larsson, among others. “I think teachers are a great resource for finding good books,” Ferguson said.
Life philosophy: “I was raised to be thoughtful of others. Accepting others, not judging others. I think that makes a strong person.”

By Tara Cavanaugh Community High School’s 40th reunion celebrations this weekend brought hundreds of alumni from across the country back to Ann Arbor for a reunion picnic Saturday, a Jazz Band reunion concert Saturday night […]

WITH VIDEO: Some 1,300 elementary students attended a youth production of “Seussical the Musical.” Full shows continue this weekend at Pioneer’s Schreiber Theater. […]

A core group of Ann Arbor Public Schools parents has banded together to advocate and create a voice for change in state funding for public schools. The PTO Advocacy Committee meets again on March 23. […]