Slauson Middle School librarian Laurel Maguire recently asked students to do something that horrified them.
She challenged them to give up their mobile devices for a day.
The result?
About six middle schoolers agreed to go a day without using a cellphone, iPad, computer, TV, videogram, or social media of any kind.
“Although our participation was low this year, I had the opportunity to talk to many more kids about the challenge,” said Maguire. “The response was usually something along the lines of, `Why would I let someone take away my phone for a day?!’ Which in turn allowed us to talk about the difference between volunteering to give up something for a short period to bring awareness to personal habits, vs. being punished by losing phone privileges.”
She said the six participants—all of whom will receive a gift card to a local bookstore—reported that the digital fast gave them back more time in their day.
“So true!” she said. “According to Pew Research Center, kids between the ages 8-12 spend on average of six hours a day in front of a screen—not including school work.”
Other studies show the drawbacks of too much screen time.

Even if they didn’t sign up to be device-free for a day, many kids during Slauson’s Digital Citizenship Week were willing to share what activities they like to do when they are “unplugged,” she said.
They then celebrated these unplugged activities, such as reading, swimming, knitting, playing with a pet, and skateboarding with photos of kids who filled in the blank, “I Unplug to ________.”
“My goal was to bring up issues of media use in a non-judgmental way to encourage kids to reflect on the social and emotional impact of our media use,” she said.
As is the case at other AAPS middle schools, Slauson students are allowed to bring cell phones to school – and the overwhelming majority do, says Maguire. However, students must keep them in their lockers unless they’re in a classroom where the teacher allows cell phones to be used for a specific purpose. 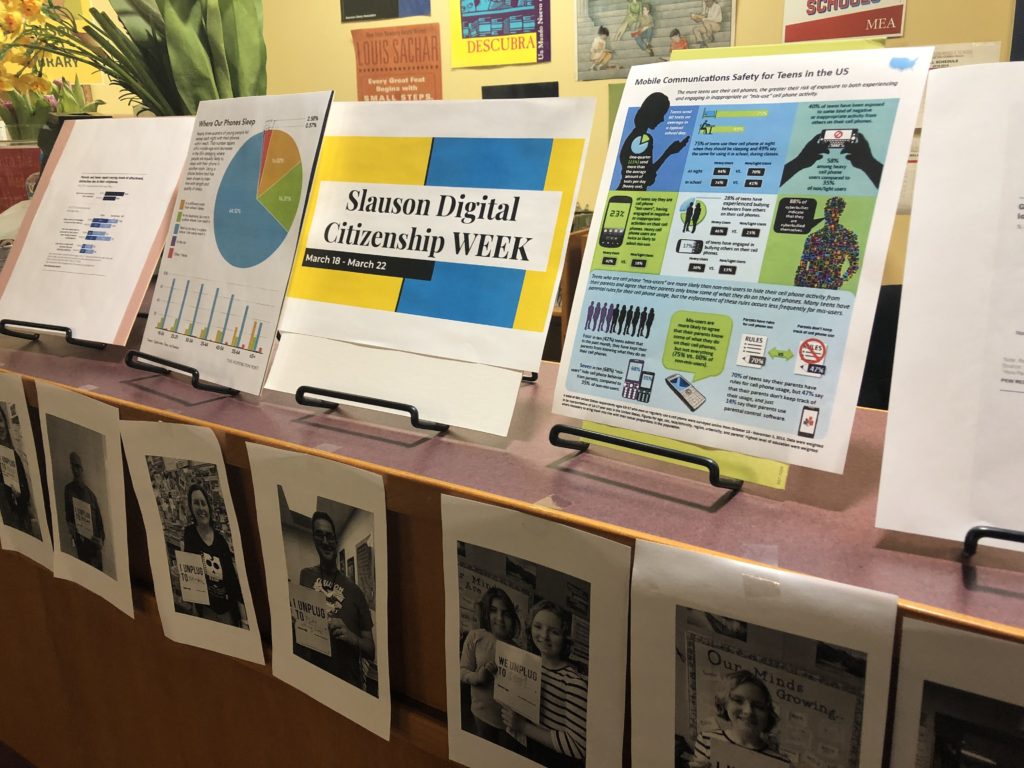 Lana Altawil, a Slauson seventh grader who has owned an iPhone since fifth grade, said she thinks it’s a good idea to take a tech break because too many people pick up their cell phone when they’re bored.
She said she uses her phone for videos, Instagram and Snapchat, but realizes it sometimes makes her want to be somewhere else.
“I’ll see pictures of people going rollerblading or to cool restaurants in downtown Ann Arbor,” she said, agreeing that sometimes it makes her feel she’s missing out.
“Everybody goes on their cell phones nowadays and it’s kind of tiring when you’re on your cell phone because all you’re looking at is people and places and you’re just on your phone seeing people doing really cool stuff. So I usually just put my phone down and go play with my little sister, playing dolls. Or sometimes I’ll just sit in bed and read a book or draw to relax my mind.”