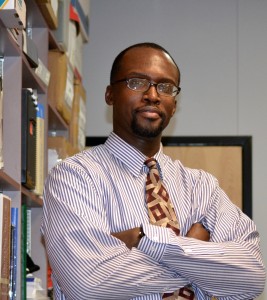 Thirteen years ago, Liam Scott was a struggling Community High School freshman who could find no reason to get up in the morning and get to school.

He was socially anxious, depressed, and much preferred the excitement and distraction of video games to sitting in a classroom. Though his distraught mother tried everything, she didn’t know what to do with him.

With a .9 GPA and a history of truancy, Scott was put into a program within Stone School for those who needed extra attention.

Padgett insisted that Liam meet him for breakfast every morning at a restaurant near his house. And every morning the two would sit at a table over bacon and eggs and talk what Liam’s future could look like if he set some simple goals—beginning with going to school every day.

Padgett recalls saying something such as: “We have a plan. And my plan is that you look at my ugly mug every weekday.”

It wasn’t easy. It didn’t happen overnight. But it worked.

“I don’t think I would necessarily have become the person I am today without that initial experience with Derrick,” says Scott, now a University of Illinois graduate student. “I had been missing that positive, confident male role model. It wasn’t until Derrick took interest in me that I said, `OK, I want to emulate his behavior, I want to act like him and be like him.’

“He’s someone who is very, very special.”

Every day, AAPS District 504 coordinator/truant office Derrick Padgett sees the struggles of district teens who are at risk of dropping out of school.

“There are a lot of Liams out there,” says Padgett, a soft-spoken father of five ages three to 17. “They have untapped potential, and they have to look at the fact that they do have potential. It’s focusing on having the motivation to look at what’s ahead.”

Anxiety is a common problem, along with other mental health issues including depression, apathy, domestic problems,

While Liam Scott had two caring, involved parents, that’s not always the case, and the lack of parental support is hard to overcome, says Padgett, an Ann Arbor native who attended Mack Elementary, Tappan Middle School and Huron High School, and graduated from Howard University.

Since AAPS offered Schools of Choice to about 600 students in the past year, Padgett’s territory has expanded in all directions, meaning he now must drive more miles to knock on more doors of troubled kids who may have an even tougher time getting to school now that they can’t take a school bus.

Sometimes he’ll leave his card, which he figures are sometimes tossed. And sometimes a parent will suggest that Padgett should mind his own business.

To be truant, a student has missed seven of the 45 days in one marking period.

“I tell them, `You have no excuse. You have all your faculties. You can walk and move your fingers. Why aren’t you doing the best that you can—just because you can?’”

Students are age-promoted in AAPS no matter how many credits they lack because that prevents the stigma of being, say, an 18-year-old freshman. One great option for those interested in credit recovery but find it difficult to get to campus is online classes via A2Virtual School, Padgett says.

Even many good students rack up too many tardies, he said, and some will spend that time at home playing video games and smoking weed.

As a district truant officer, he’s not afraid to say something to a kid he knows should be in school. Sometimes those are classmates of his three older children, all of whom attend Skyline.

He said the fact that the high schools collectively have so many different lunch schedules, and Huron’s campus is open at lunchtime, makes it somewhat difficult to realize who should and should not be out in the late morning/early afternoon.

“As a community, you have to invest in all kids,” says Padgett, whose wife, Donyale, is a professor at Wayne State University. “The adults in our community have to identify and step up when they know students aren’t where they’re supposed to be.

“I’ll tell a kid, `It’s 1 p.m. Why are you here at Kroger and not in school? I could easily go to your parents right now, but I thought I’d talk to you first. If it happens again, I’m going to tell them.’”

Ritchie Coleman, the public safety community coordinator for Pittsfield Township, said that Padgett is filling a crucial role for the district.

“It’s important to not only reach out to the families and students, but to be that visible force to work with all of the entities,” said Coleman. “What parents need most is the link and continuity, and Derrick has been really instrumental in being not only that conduit for students and families, but for the whole district.”

Coleman said he admires the “manly man role model” Padgett is for so many students who need more positive role models.

“And he shows how important it is to be consistent,” Coleman said. “Children pay close attention to what we say and what we do.”

Liam Scott admits that even with Padgett’s help, high school continued to be a struggle. But graduating from CHS with a 2.5 GPA was a triumph in itself, and when he enrolled in Eastern Michigan University’s Summer Incentive Program, everything came together for him. He realized that AAPS support was no longer there to watch over him, and it was all up to him to make a go of it.

Scott said Padgett constantly reinforced the message that he had something to contribute, and that it began with the simple act of showing up and doing the work, one day after another.

And though Scott had seen a therapist at the time, Padgett’s encouragement—as well as his genuine friendship that lasts to this day—meant much more to him.

“Derrick had an ability to connect with me in a way where I could tell he was not just doing it because it was his job,” he says. “I felt he was invested in me as a person rather than as a means to a paycheck.”