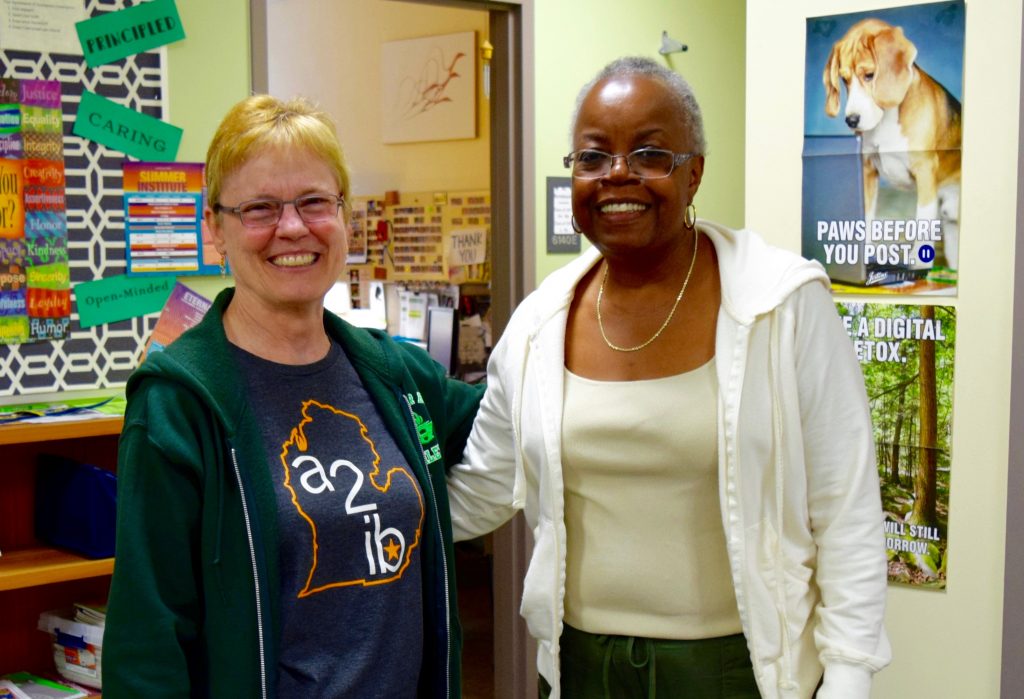 As Huron High School says goodbye to two beloved guidance counselors, many will miss the collective wisdom of the retiring Wendy Reinhardt and Denise Eaddy-Richardson.

In addition, future Huron  commencement ceremonies  may sound a bit more mellow without their enthusiastic, booming voices at the microphone announcing graduates’ names.

“Wendy Reinhardt and Dr. Denise Eaddy-Richardson have been exceptional counselors,” says Huron High School Principal Janet Schwamb. “They provided outstanding support to their students, families and staff during their time at Huron. Going above and beyond was their daily norm. I wish Wendy and Denise all the best as they begin a new chapter. They will always be part of our Huron family.”

Every time Denise Eaddy-Richardson would take a career interest survey, she learned she would excel as four things: a lawyer, teacher, counselor, or minister.

Over the decades, she has filled all those roles. 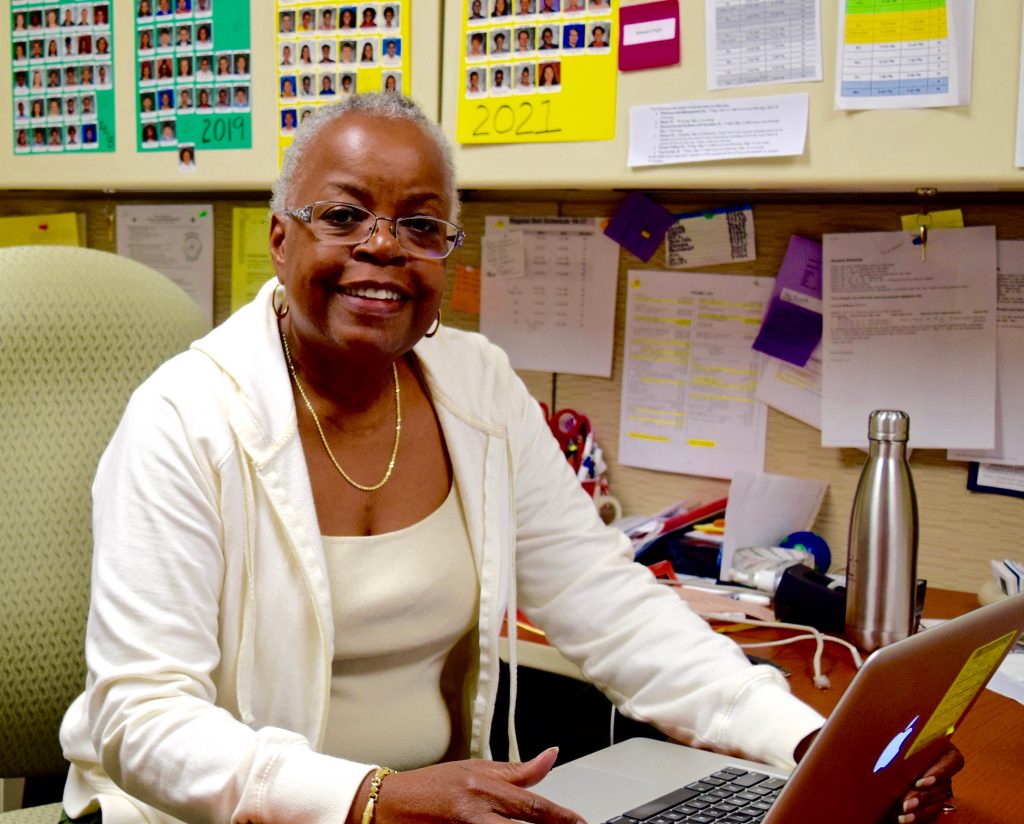 The Milan native began her career as an English teacher at Milan High School.  But she couldn’t forget a cousin who had wanted to be a lawyer, but died in a tragic accident before he got the chance.

“That resonated with me forever,” she says.

So after four years of teaching, she accepted a full scholarship to the California Western School of Law, where she earned her juris doctorate degree.

Then she returned to the Ann Arbor area, where she practiced law with UAW Legal Services for 14 years.

And then one day when her 13-year-old daughter said: “Mom, we are tired of going to the law office after you pick us up from school. We want to go home. And we want you to go home with us. You have a lot of degrees. Use one of the other ones.”

So she returned to education, counseling at Huron High School in 1998.

“Voila! I returned to my first love—for which I’ve always had passion.”

It was not a hard decision, because she knew it was best for the family.

“I love practicing law. I love trial work. But I’m a person who has a lot of different passions,” she says.

Along the way, she’s served the district as Equity Officer, led the district Crisis Team, and at Huron has served as AVID counselor, Rising Scholar counselor and MASH (Mandatory After School Study Hall) coordinator and counselor.

“I’ve had the pleasure to serve as the informal department chair for the last eight years, so that’s allowed me to have an opportunity to impact new curriculum, new changes in the building with an eye on advancing student needs, student access, student participation and that’s been rewarding,” she says. “It’s been a great ride.” she says.

As a counselor, she has found that the developmental stages of teens tend to remain constant. But one thing has in fact made a marked difference in teens: technology.

“We are seeing more kids who have anxiety,” she says. “And that is because of the increase of it, schools are ill-equipped to serve these students well. We need more social works or psychologists for that work, not just counselors. That piece of the work—helping students with anxiety, depression, suicidal ideation—can eat up all the time.”

The studies are showing that the technology is increasing the anxiety of students because they’re closeted in an area, focused on their phone rather than developing relationships they should be developing through conversations, being with people in person, personal touches, and understanding nuances of conversation, she says.

“They’re cut off socially so they experience more isolation and anxiety,” she says.

She and her husband of 33 years, Aldon Richardson, hope to do some travelling. And she’ll be more involved in the ministry through her position on the ministerial board of the Strong Tower Ministry in Ypsilanti.

What will you miss most? I will certainly miss daily interactions with my students more than anything else.

If you could pass on any wisdom to the counselor who takes your place, what would that be? I would pass on the wisdom of loving.  Meet each student with an open heart and appreciate each one for him or herself.

Why retire now? I am retiring now because I would like to leave healthy and happy.  This time feels right for retirement.

What are you looking forward to most about retirement? I look forward to creating my own priorities, schedule, deadlines, bedtimes.

She did her student teaching at Clague Middle School while working towards her degree in education at the University of Michigan in 1979. A year later, she’d also earned her master’s from U-M.

This, despite what she felt was a negative attitude at U-M regarding a career in education.

“At that time it was lawyer or doctor,” she said, before adding with a laugh: “Now it’s engineer or doctor.”

But she had neither second thoughts at the time—nor any regrets.

“I can’t see myself doing anything else,” she said. “I just feel like it fits me.”

When the first of her two daughters was born, she decided to stay home during the day and continue her teaching career in the evenings through the AAPS Adult Education program.  Later Adult Ed moved to the newly opened Stone High School, an alternative high school that is now Pathways to Success.

She was the school’s first counselor, and  became part of the team that started Project Education, which became Stone High School.

“It was so real,” she recalls. “It was just about getting kids to graduate and figuring out how to help them with hard situations. But you could talk about birth control and I could have condoms on the desk. It was a lot of kids with a lot of issues. But we were a group. They had it in common. They had each other for support. And (former principal) Gayl Dybdahl was just a phenomenal leader.

After Dydahl retired in 2007, the school’s name changed from Stone to Ann Arbor Technological High School to its current Pathways to Success Academic Campus.
“There were some difficult times, with several leadership changes in five years,” she says. ” Now, I’m very encouraged with Shaenu Micou as the interim principal.”

It was in 2012 that Reinhardt decided to move to Huron—a decision she calls “the best thing ever.”

“I probably would have retired five years ago if I hadn’t come over here,” she said. “This was better than me retiring. I’m so grateful. I was welcomed with open arms. The relationship between administration and counseling has been great. I was so worried that my skills wouldn’t transfer, and they did!”

As much as she enjoyed teaching, counseling has been the perfect fit.

“I have so much respect for the classroom teacher,” she says. “They’re doing so many things at the same time. Counselors do a lot of different things, but they get that one-on-one with kids. That’s what I like. And no classroom management. Just relationships.”

What will you miss most?  Colleagues, students, daily smiles and hugs, the feeling of making a difference, keys that have opened so many doors.

If you could pass on any wisdom to the counselor who takes your place, what would that be?  Be gentle with yourself.  No one can do it all; know that and do your best.  Help students find their strengths and resilience.  Enjoy them!

AAPS career highlights:  Being part of the team that started Stone High School.  Finishing my career with the amazing staff at Huron. My career started with subbing at Clague—where I had student taught with Bob Galardi—in 1979.  I did some long term subbing, then was hired at Scarlett in the early 80’s.  I taught English at night at Pioneer for the adult ed program while my kids were little and went to full time at Stone School around 1992.

What are you looking forward to most about retirement? Family time with daughters/son-in-law in DC and Charlottesville, working around our house and yard with my husband Dave, traveling to visit far-flung friends, being open to a new chapter.