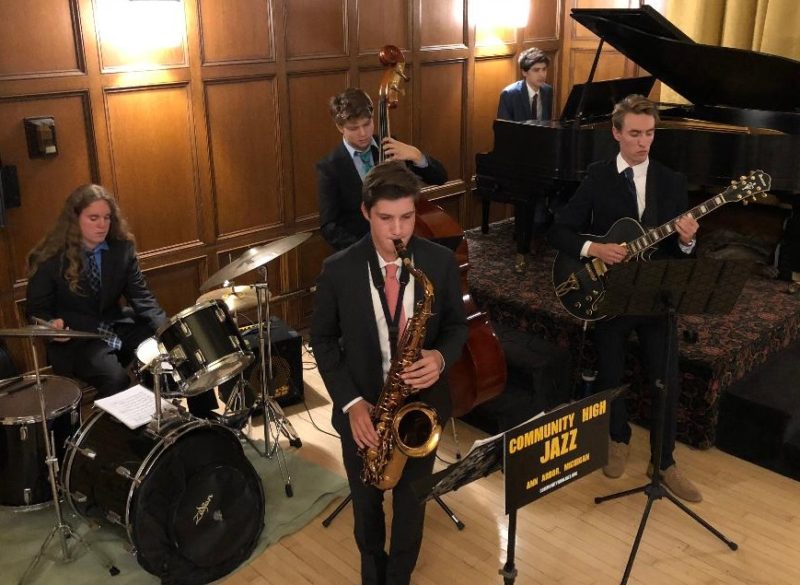 Community High School’s annual jazz concert, which will be staged Tuesday night in Ann Arbor’s Lydia Mendelssohn Theatre, is far from your ordinary high school band performance. It will be more of an improvisational extravaganza.

You could say it’s a blast. In fact, you could call it an “Arctic Blast,” which is the name of the show.

“It’s unlike virtually any other high school music you will find,” said senior Oliver Mayman, who will play drums in the top group of the evening and vibraphone in the second group. “This is jazz. Real jazz.

“There are hardly any high schools that teach jazz, and even those are just reading sheet music and playing what’s there. We’re improvising. I have no idea exactly what I’ll be playing the night of the concert.”

That isn’t to say this is musical mayhem. There are parameters to which the musicians adhere. But it is feel. It is rhythm. As Mayman says, it is jazz. Real jazz. 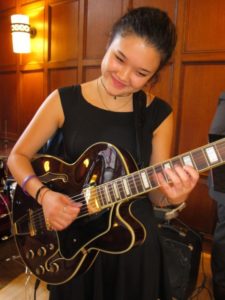 “It’s risky music, to be sure, because sometimes one of them can throw a curveball at a fellow band member,” said Jack Wagner, who has been the Jazz Program Director at Community High for the past 11 years. “It can be a difficult kind of music for our beginning students to play, but we encourage all of our students to push the boundaries. It helps that the crowds are really supportive.”

Have we failed to mention the crowds?

The annual jazz concert formerly was held at Community High, but the audience became too large for the school to contain. It then moved to The Neutral Zone in Ann Arbor before once again outgrowing that venue.

This year, more than 80 Community High School students comprising 10 ensembles will perform. The groups range from freshman to seniors, and all experience levels are represented.

“We have beginners who have been playing jazz for three and a half months to students who have been playing for years and have won international awards,” Wagner said. “The different levels of experience and talent are part of the fun. You hear all sorts of jazz. We’re very pumped up for a big night of music.”

The Tuesday night show is actually split into two starting times. The first show begins at 6 p.m. and the second show begins at 8 p.m. and runs until 9:30. Tickets are $5 and can be purchased anytime from 6-8:30 p.m. and concertgoers can enter and leave anytime they please.

Like the musicians, the audience can improvise just a bit.

“We don’t want people to think they have to come at 6 and stay for three and half hours,” Wagner said. “They certainly can if they want to, but they also can come and 6 and leave at 7, or come at 7 and leave at 9, however they want to do it.”

“They play in larger groups because it’s quite a responsibility to be one-fourth or one-fifth of a band,” Wagner said. “We have them play as if it were a small group, but without so much responsibility.”

Wagner says the fact that there are 10 ensembles playing means nothing goes stale, even in a relatively long time period. Three and half hours of music might seem like a long time, but not if it’s done right, according to Wagner.

“Every band is different, there’s a different configuration, everything stays fresh throughout the night,” he said. “That’s the great thing about this format. It’s constantly moving. People don’t have to stay for the whole show, but if they do, they will be entertained from start to finish.”

Community High’s musicians know a thing or two about entertainment – particularly a select group of six who will perform on Tuesday night. This group played Nov. 26 at Hill auditorium for University of Michigan’s University Musical Society dinner. Famed jazz trumpet player Wynton Marsalis was in the audience, along with U-M Athletic Director Warde Manuel and many donors and VIPs. The Community jazz performers played background music throughout the evening and also had a time when the attention was focused solely on them.

“It was a great experience,” Wagner said. “Wynton Marsalis came over and had some kind words to say about their performance. It was really nice to hear.”

If the jazz is good enough for Wynton Marsalis, it no doubt will be good enough for any Ann Arbor music enthusiast who shows up Tuesday night at Lydia Mendelssohn Theatre. The students have been preparing; they are ready.

The question is: Are you?

“It should be a lot of fun for everyone,” Mayman said. “We’ve been spending a lot of time in class thinking about what we might play so that we won’t have to think about it. We’ve practiced enough to get the full faculty of our instruments.

“The music will just flow.”

WHAT: Community High School Jazz Program’s Annual Winter Concert
WHO: 80 Community High student jazz musicians comprising 10 jazz ensembles
WHERE: Lydia Mendelssohn Theatre, 911 N. University Ave., Ann Arbor
WHEN: Tuesday, Dec. 18, 6-9:30 p.m. Concert is split into two shows, with 6 p.m. and 8 p.m. starting times. Concertgoers may come and go as they please at any time during the performances, and tickets are available until 8:30 p.m.
TICKETS: $5, available at the door. Children under 5 are free.