Community Ensemble Theatre director Quinn Strassel and his students have accepted the challenge of staging an experimental play-of-many-plays, the award winning “Too Much Light Makes the Baby Go Blind.” Their production of Chicago’s longest-running show — which only recently was made available to amateur and educational theatre companies — runs from November 12-15 at Community High School’s Craft Theater. 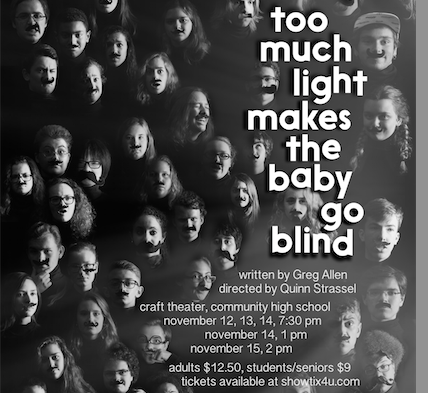 “This show is funny, edgy, and at times, highly emotional,” Strassel said. “Most importantly, the unorthodox structure allows us to feature dozens of kids in lead roles.”

“It’s ambitious, but I think the kids are excited about taking on the challenge.”

CET’s production of “Too Much Light…” retains the play’s interactive experience, while slightly modifying its content and structure for teenage performers. Each of the 30 two-minute “plays” the actors have prepared are numbered in the program. When each play ends, the next number the cast hears called out by the audience determines the next play performed.

“Too Much Light…” playwright Greg Allen intends to eliminate illusion from theater. “…all of our plays are ‘set’ on the stage in front of the audience. All of our ‘characters’ are ourselves… We do not aim to ‘suspend the audience’s disbelief’ but to create a world where the stage is a continuation of daily life …” Allen wrote about his work.

Allen conceived of both the show and the neo-futurists movement that developed it in 1988. Since then, “Too Much Light…” has been performed three times weekly, 50 weeks a year. Sister productions are running in New York and San Francisco.

One of Community High School’s largest student activities, CET boasts more than 70 participants from a student population of about 450. Strassel’s inclusive philosophy means that everyone who auditioned, or asked for a place on the crew, was accepted.

Strassel’s decision to jump on the newly licensed work continues a string of uncommon choices for the high-school theatre group. Past examples include a multi-media production of “Julius Caesar” featuring pre-recorded news reports, and “Urinetown.” CET also produced the musical “Bob, a Life in Five Acts,” which originally debuted at the Humana Festival of New American Plays, and won the 2010 Barrie and Bernice Stavis Award from the National Theatre Conference.

For more information and for tickets to “Too Much Light Makes the Baby Go Blind,” visit CET’s website at communityensembletheatre.weebly.com.