Joan Fitzgibbon hopes to be a resource for the Ann Arbor Public Schools as the district looks ahead to possibly expand its foreign language offerings in the future.

The Allen Elementary School principal recently returned from a trip to China, where she visited a variety of schools in different parts of the country as part of a cultural exchange through the Confucius Institute at Michigan State University – a Chinese language and culture education program.

In December, Fitzgibbon traveled with 15 other principals and administrators from Michigan and 400 from around the country on her trip, and has been sharing her experiences with Allen students since she returned. She said she hopes to be a resource as the district moves ahead to consider teaching other languages.

“It was the best experience I have had in 23 years as an educator,” she said. “It was so enriching. This was great for a lot of reasons … but also to recognize that we have a really good education system.”

On a recent visit to Andrew Sargent’s third-grade class, she told students that Mandarin Chinese is one of the languages being considered as part of the district’s World Language initiative – a partnership with the University of Michigan School of Education.

“From the time they enter third grade, they learn English,” she said, speaking about the Allen students’ counterparts in China. “ Wouldn’t that be something – for you to learn Mandarin Chinese?”

Ann Arbor launched the World Language initiative as part of the district’s Strategic Plan in the third grade last year, expanding it to the fourth-grade this year with plans to expand into the fifth grade in 2011-12. The language currently being taught is Spanish, but school officials in Ann Arbor and at U-M have said they would like to expand it to other languages in the future. 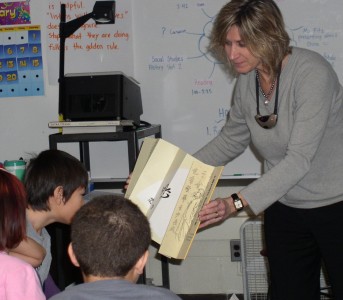 On that topic, Fitzgibbon said she hopes to have a discussion sharing her experience in China. Because others on the trip were farther along in getting Chinese immersion programs in their schools and districts, Fitzgibbon said she is pleased to have the professional contacts and networks to call upon for Ann Arbor.

Fitzgibbon told Allen students their delegation was welcomed enthusiastically. “We felt like we were rock stars – everybody was so nice and happy to see us,” she said.

One of the schools visited was in the Chongqing Province where she toured a new secondary school campus with 6,000 students where 70 percent of the students stay overnight in dormitories through the week.

Chinese children go to school from 7 a.m. to 6 p.m. each day, Fitzgibbon said, getting a two hour lunch when they are encouraged to “get outside and get some fresh air.”

The average student-teacher ratio in China was 50-to-1, she said. Showing students a photo of an 11th grade class in one school, she noted that the total class had 1,000 students compared with the 60 in the third-grade at Allen.

Also, each school she visited had a specialty. For example, she said one was known for their calligraphy, another did paper cutting. Middle and high school students focus on science and technology.

She challenged Allen students to ask themselves “what makes Allen different?” and said she’d like to develop a theme for their school.

In a blog post about her trip, Fitzgibbon said: “We received warm welcomes lots of hugs, were shown well rehearsed and beautiful performances, and excellent students creating their specialized craft. At the first primary school this was paper cutting! We then saw a performance by kindergarteners, third-graders and the dance troupe. We truly were treated like royalty. Overall, the students were like any students. Full of excitement, eager to meet us and kids.”

In addition to Chinese schools, the group visited the Lama Temple, the Confucius Temple, saw a museum in Beijing that had the Olympic Torch on display and spent time at the Great Wall and Tiananmen Square and the Forbidden City.

She told students that the Forbidden City has 980 buildings and 8,700 rooms, allowing the Chinese emperor to move about. “The enemy never knew where he was staying,” she said. Another fun fact: The Forbidden City also has a 15-foot deep concrete floor, laid in a crisscross pattern, so that the enemy could not tunnel from below and gain access.

Deadline to apply for vacant board seat is Feb. 19

Residents interested in serving on the Ann Arbor school board have until Friday, Feb 19 to file an application for a seat vacated by Adam Hollier. […]

Sunshine Review is a non-profit organization that assesses state and local government transparency, evaluating the content of every state website and more than 60,000 local government websites. The AAPS website, a2schools.org, has won yet another […]

The Ann Arbor Public Schools is supporting the City of Ann Arbor and the University of Michigan to bring Google’s broadband high-speed network to Ann Arbor. […]