A committee charged with finding the best bus service for Ann Arbor Public Schools has recommended that the Board of Education hire Durham School Services to take over the job now handled by the Washtenaw Intermediate School District.

Superintendent Jeanice Swift said AAPS looks forward to a continued partnership with the WISD through the end of the school year, while at the same time focusing forward on the next chapter of transportation in the district.

“We’re excited to recommend the company this evening that has incredible experience and expertise in transportation,” she said. “Getting students safety to school is their business every day all day. It’s what they do.”

The district’s five-year contract with WISD concludes at the close of this school year.

This new three-year contract with Durham would cost about $16.72 million and begin July 1.

He said it’s also a plus that the district would continue to own its buses, which provides more flexibility; and that Durham will improve the buses by installing GPS, electronic vehicle inspection reporting system and security equipment.

WISD and Durham were two of five vendors that submitted bids for the contract. The others were Auxilio, Dean Transportation, and First Student.

Swift explained that all interested drivers and monitors will be interviewed for jobs with the new company, and that those who are hired would receive a raise and benefits such as health insurance and a matching 401K program.

Headquartered in suburban Chicago, Durham has 10 operations in southeast Michigan. Durham management would move into an office at the AAPS transportation garage at Balas.

Durham’s bid for the three-year contract was the second lowest of the five.

When trustee Andy Thomas asked why the committee wasn’t recommending First Student, which entered the lowest bid by about $100,000, Demetriou explained that as the largest school transportation company in the nation, First Student would not be able to provide the necessary personal attention, and the committee feared getting “lost in the shuffle.”

When trustees expressed concern about the flexibility of routes, the difficulty in the past of retaining drivers, and the high expectations in the Ann Arbor community, the Durham directors assured them that they work closely with districts to come up with the best routes, that a fulltime staff in Ann Arbor would keep connected with families; and that “In our world, the bus driver is Number One.”

“Our desire is to hire as many of the folks you have in place as we can,” said Justin Greibel, Durham’s director of business development. “We would like to hire them all.”

Thomas said he is happy to award the contract to a private company if it can provide at a competitive price, a better level of transportation than the district could provide itself.

The board is expected to hold a second briefing on the matter and vote on the contract on March 11.

If selected, the Durham directors said they would work with administration on the transition beginning March 12.

Praising the work of bus drivers and monitors, Swift said she realizes that change can be stressful, and that the district will support them throughout the process. 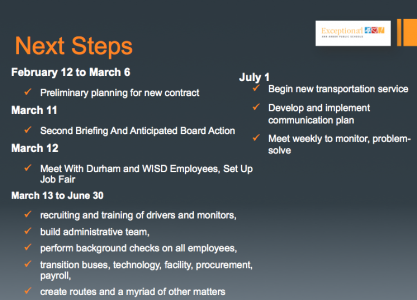