That’s when some older kids sought him out, jumped him, and smashed eggs and poured soda on him, sending the message that high school was going to be hell.

Since that day 12 years ago, Matt’s father Kevin has made it his mission to help stop bullying.

This morning, Epling took that message to two assemblies of students at Huron High School.

While many bully prevention programs get down to stopping the behavior, Epling encourages students to start doing positive things, such as looking out for others, calling out bad behavior, holding a door open, smiling, or inviting someone to eat lunch.

“Bully prevention is about making choices,” he said, noting that students can choose to help, rather than harm.

Wearing a Batman tie for his favorite super hero—an ordinary man who devoted his life to helping those in trouble—Epling said nobody knows what someone is going through at any given time, and a small gesture could have a huge impact.

Anyone can develop empathy for others and become a hero, he said.

“You must unlearn what you have learned,” he said, quoting Jedi Master Yoda.

Epling said it’s time to quit believing the old lines about “kids will be kids” and “boys will be boys.”

“Don’t let anyone tell you that you can’t do anything about this issue,” he said. “You can do so much.”

At the close of his speech, Epling encouraged students to accept and wear a bracelet to promote empathy at school.

Assistant Principal Janet Schwamb said Epling’s message of changing school culture and encouraging kids to stand up to bullying is a powerful one.

“Bullying’s a problem in every school,” she said. “And so it needs to be talked about, and programs need to be implemented to address the behavior that’s unacceptable.”

She said cyber bullying has added an entirely new dimension to an old problem because it’s not necessarily seen by adults.

Epling will also present a parent workshop on the same topic from 6:30 to 8 p.m. today (Nov. 5) in Huron’s Meyer Auditorium. 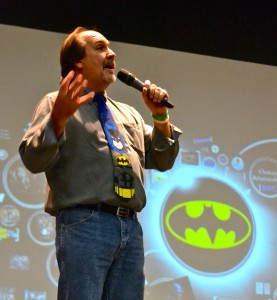