Inclusion is so built into the culture at Wines Elementary, it’s hard to spot it when you see it.

People sometimes think of inclusion as something out of the ordinary; as an outsider entering in to a new situation, says Principal David DeYoung.

“But we don’t see it as that,” he says. “We see it as: You are part of the community. And—like everyone else—you bring your own needs to the classroom. Everyone gets what they need. Some kids need different things.” 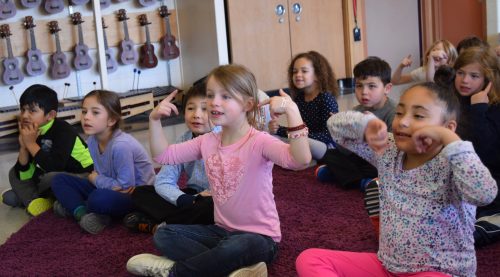 There aren’t enough eligible students or programs to demand each program in every school, so students are enrolled in the school that best meets their unique needs as indicated by their Individualized Education Program (IEP).

Each school promotes inclusion, and none more so than Wines.

When DeYoung first got to Wines eight years ago, there was a self-contained classroom for grades K-2. Those students then moved on to another school in third grade.

Now these students can complete a K-5 experience at Wines, more often than not moving back and forth between general education and one of two self-contained classrooms offering individualized instruction.

“First and foremost it’s the right thing to do for kids who have a disability to spend as much time as possible with their general education peers,” says DeYoung, noting that it’s great for their long-term development living in the larger world. “It’s good for the general education kids to experience kids with disabilities. It’s good for everybody. It’s absolutely crucial for everybody.”

He says the gen ed students treat those with special needs as equals because they are equals, but they also support them when they need to, and become advocates as well as peers.

Aekta Jaglan’s son, Vivaan, began kindergarten at Wines—which is not his neighborhood school—due to his unique needs and the support he needed.

“And I will say this was best decision we made for his education,” said Jaglan, noting that Vivaan is in a third grade gen-ed class now and works hard to keep up with the pace. “He has wonderful support from his class teacher, teacher assistant and other staff that work with him for his special needs.”

Jaglan said it’s wrong to think of inclusion as students in gen ed at all times. Rather, education must be tailored to meet the student’s individual needs.

“One example that comes to my mind where inclusion helped tailor this need is the PLTW program,” said Jaglan. “Project Lead The Way gave Vivaan a wonderful opportunity to nurture his interest in science and technology and work closely with his peers. In my opinion having inclusion as part of school system not only does the students with special needs benefit from being included in a gen-ed setting, but their peers benefit from being exposed to children with a diversity of temperaments. So it’s a win-win situation for all.”

A win for all

Annemarie Dolan agrees that all children and families benefit from inclusion at Wines. Her daughter, Kaitlyn, who is now in sixth grade at Forsythe, made friends with a boy her age who was in her classroom most days and in a self-contained classroom on other days.

“Kaitlyn’s experience was wonderful and it was an experience that she chose to have, not one that was pushed by me,” said Dolan.

The two worked on class projects together, ate lunch in a group of friends, and partnered during a field day experience for communication class students and their friends from traditional classrooms. Kaitlyn attended a couple of his bowling birthday parties as well.

“Since I got to know him in my classroom I never thought of him as somebody who needed extra help, I thought of him like any other student,” says Kaitlyn. “I treated him like my friend and he treated me like his friend.”

Although they see each other less frequently now, they are still friends at Forsythe Middle School.

“From a parental viewpoint, I couldn’t be happier that my daughter had this opportunity,” said Dolan. “The inclusion program at Wines was an experiential way for her to learn to see commonalities in people instead of differences. She didn’t think of him as a boy in a communications classroom. She thought and thinks of him as her friend.”

DeYoung is proud of how Wines integrates students into the program, and says it’s also hard work.

“We make mistakes every day,” he says. “We’re still learning. There are missed opportunities on a daily basis for better inclusion opportunities. We learn all the time. We do things unintentionally when we aren’t being as inclusive as we should be. We acknowledge and learn from them and are comfortable having those difficult conversations with each other.”

Another source of pride right now at Wines is the fact that a fourth student in four years is transitioning out of self-contained classroom and into fulltime general ed.

All students included in a gen ed classroom are part of the class, and the teacher is as responsible for their growth as the self-contained teacher, he says.

“They’re not just guests in your classroom,” says DeYoung. “It did take some time for staff to become comfortable with that.”

Nine years ago inclusion as a priority was a new concept.

“Teachers wanted so badly to do right by these students and they didn’t necessarily have all the tools to do that,” says DeYoung, noting that ongoing training has helped.

What about disruptions in the classroom?

Because gen ed students are used to being around those with special needs academically and socially, any disruptions are taken in stride. They’re used to it.

“They understand this is part of who these kids are,” says DeYoung. “And they have their own challenging behaviors that we need to get used to.”

“They learn things in gen ed they would never learn in my room,” she says. “They learn things about the order of school; how to get in line nicely; the modeling in gym class; how to sit at a desk and quietly do their work. Then in my class they get instruction they can’t get in a regular classroom; things that are specific to them that they need because they have delays in some areas that they need help with.”

She says Wines does a really good job of inclusion because the gen ed staff is open and accepting to having the kids be a part of the program.

“It’s hard work, so we have to help teach them and work with the gen ed staff about the importance of their role,” she says.

It all requires lots of planning, especially at the beginning of the year, and schedules are fine-tuned as the year moves on.

“I like to look at my kids as gen ed first, and that’s the least restrictive environment,” says Hospadaruk. “They’re there when they can be there. I look at the times they’re not successful there, and those are the times they come to the self-contained room. Versus the other way around. That’s where they begin in my mind; where they belong in my mind.”

Cathy Pinkerton says Wines staff and students have been very welcoming to her fourth grade daughter Ella Pinkerton Dehlin, who has Down syndrome.

Ella was fully included in a general education classroom in kindergarten with the help of a teaching assistant, but it was decided that she learned academics best in smaller group settings provided in the self-contained classroom. She was able to focus better there, actively engage, and learned to read, thanks to her 1st-3rd grade teacher, Beth Hospadaruk.

Ella each year is assigned to a general education teacher and classroom where she spends part of each day, usually with a TA’s assistance.

Ella starts her day in the Rec & Ed School Age Child Car (SACC) before-school child-care program fully included in morning play and activities. Then she usually goes right into whatever is going on with her general education class which is often music or art.

Music teacher Jessica Glaser supported Ella performing with the fourth grade for their annual concert which this year, included singing and playing recorders. When one student initially raised concerns about Ella’s recorder playing, Glaser responded: “Do you ever squeak while playing the recorder?”

Glaser arranged for Ella to be paired with another student so she would only play when that student was playing, which was creative and worked out well.

Ella’s daily schedule for the rest of the day varies and includes recess, lunch, work with an occupational therapist or speech therapist, work on reading and math in Heather Gray’s self-contained 3-5th-grade classroom, and on some days adaptive physical education, library, 4th-grade science, and adaptive music. Ella usually ends the day with group work and then some songs and dancing in Gray’s classroom. She participates in field trips as well.

“The enthusiastic and positive team approach has worked very well with Ella and we have appreciated each and every teacher, TA, staff member, and therapist who has worked with Ella at Wines,” says her mother. “Because most every day also includes challenges, I am grateful for teacher and staff flexibility, creativity, constant support, problem-solving, and daily communication.”

“Her years at Wines have provided a strong foundation for Ella as she moves on to middle school, high school, and then college, pursuing her own goals and dreams. For now, Ella loves school at Wines and we are all proud of her successes great and small, and so is Ella. Every day.”

DeYoung says parents have come to expect that this is what classrooms look like at Wines School.