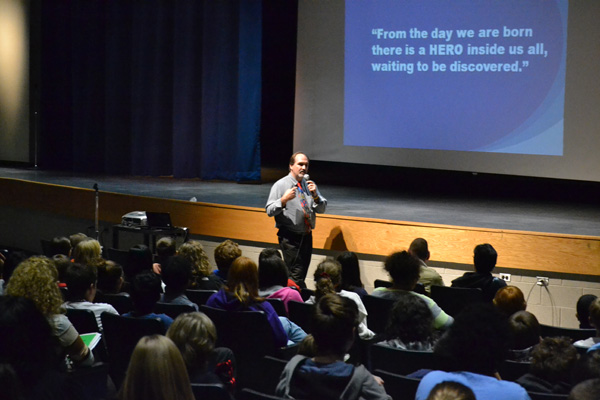 Last year in December, Kevin Epling was thrilled when Michigan passed anti-bullying legislation called “Matt’s Law” in memory of his teenage son who committed suicide after a hazing incident.

Epling worked for years to get that legislation passed, but he’s not done being an advocate. He’s continuing to tour the state and talk to students about bullying, and he spoke at Forsythe Middle School Tuesday to the entire student body.

Although Epling touched on his son’s experience with bullying, his story wasn’t the focus of the day. Instead, he focused the discussion on defining bullying and encouraging students to become agents of change.

“I got drafted into this war on bullying,” he said. “My job is to go out and enlist. When I talk to parents, when I talk to students, I am asking them to get involved.”

Epling shared stories of inspiring teenagers who had the courage to address bullying. He shared the story of a young man in Minnesota who created an anonymous Twitter account that sent supportive statements to students who had been bullied online. He talked about two teenage girls in California who sent supportive letters to a bullied teen in another district. They attracted hundreds of more letter-writers, and those letters were compiled in a 2008 book, “Letters to a Bullied Girl.”

“We can’t be bystanders,” Epling said, noting his favorite quote from Dr. Martin Luther King, Jr: “In the end we’ll remember not the words of our enemies, but the silence of our friends.”

Epling also talked to the students about the dangers of cyber-bullying. “The big difference with cyber-bullying is that you never have to see the damage done to your victim,” he said. “It all happens behind a screen.”

Cyber-bullying is one topic that Epling will feature when he speaks at a parent session tonight at Forsythe.

“The session is not only for parents who have kids who are (victims of bullying). It is for parents to really understand the dynamic of how bullying has changed,” he said. “Bullying has dramatically changed since most of us were kids, and especially with technology. We as parents really need to be open to being educated about what bullying is today and what we all can do together.”

Parents who attend will likely leave feeling as positive as the students –– who gave Epling a standing ovation –– did today.

“It’s really helpful that someone came to talk to us who’s not just a teacher here,” said eighth grader Ryan Bielawa after the assembly.

“I wouldn’t want to be bullied,” said Ryan’s classmate Inori Nakamura. “I feel so encouraged now to step up and help someone out.”

Epling brought along a bag of wristbands bearing his son’s name and the words “Be The Change.” “This is a pay-it-forward,” he said. “Not everyone gets a wristband; there’s only so many to go around. When you have one, you are committing to becoming one of those agents of change in your own school. When you see something happening, if you step in, give the band to that person you’re helping, or give it to someone you see helping someone else.”

After the assembly, dozens of students gathered in the main office to pick up the limited number of wristbands.

“He really did fire them up,” said Forsythe Principal Dr. Janet Schwamb. “They are the change agents. Peer-to-peer is the greatest influence for them –– that’s where it’s at.”

Schwamb corresponded with Epling via email for nearly a year before he was able to make a visit to Forsythe. In addition to his advocacy work, touring schools and being co-director of Bully Police USA, he maintains a full-time job as a videographer. His advocacy has taken him to more than 30,000 students in Michigan, to conferences across the country and to Washington, D.C. for a anti-bullying summit at the White House where he met President Barack Obama.

Epling will speak with parents tonight at 7 p.m. at Forsythe.

By Tara Cavanaugh, AAPS News Service Pete Thomas knows a few things about losing weight. Thomas won $100,000 after being a contestant in the 2005 season of NBC’s “The Biggest Loser,” a reality show dedicated […]

“I always tell the kids: I am more interested in your process than I am in the answer that you get.” […]