It’s an exciting year at Ann Arbor Public Schools, which is now the only district in the state to offer Project Lead the Way curriculum in each K-12 building.

PLTW is a comprehensive STEAM curriculum delivered nationwide in more than 40,000 school districts.

“But very few do it to the extent we are delivering it,” says Tom Pachera, the district’s STEAM coordinator, who also teaches engineering classes at Skyline High School.

Students benefit by being seeing the importance of math, science, technology and art in solving problems, says Pachera, while they are exposed to the many career choices in STEAM at early ages.

A PLTW classroom takes all the aspects of science, technology, engineering and math and applies it to hands-on activities that engage students.

“They use what they learn,” says Pachera, “to design and engineer our future.”

“Parents wonder, `How is this different?’” she says. “A lot of it is different because the kids have to actually apply their knowledge. They learn something new, and then they apply it to solve a problem. It’s a problem project-based curriculum, which not all curriculum is.”

“We find that the students are really engaged.”

AAPS began using the PLTW Engineering and Bio-Medical Engineering curriculum at Skyline High School in 2008. The district added the elementary Launch modules at A2Steam in 2014, along with engineering at Huron High School.

Last year, six more elementary schools and all seven middle schools were added, along with the remaining high schools.

This school year, the other 14 elementary schools have been added, with half starting PLTW this semester, the other half, next. 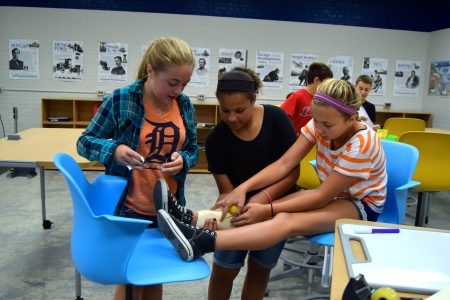 Also new this year is the addition of computer science at Skyline.  And the sixth grade module that all students take now includes not only engineering and design practices, but some bio-medical. That’s important because of the bio-medical magnet at Skyline High School, and the bio-medical career opportunities here, says Colligan.

All students in every elementary school will complete two modules in one semester.

PLTW is not a “special” in which the kids are pulled out of the classroom. Rather, their teacher pushes into the classroom during the science block so the PLTW teachers are actually co-teaching with the classroom teacher.

“It’s important because we want to make sure it ties to all of the content areas,” says Colligan. “So we want to make sure that classroom teacher is also informed on what is going on in the Project Lead the Way so they can tie it to other content standards in science, math, and technology.”

Sarah Van Loo is a new PLTW teacher this year, and will be teaching at Pittsfield and Allen.

She says PLTW is good for elementary kids because they get to learn STEM concepts hands-on.

“While working in groups, they solve problems that don’t have a simple right or wrong answer, helping them to develop the 21st century skills of collaboration, communication, creativity and critical thinking,” she said.  “So far I have had a great response from my students. They are excited when they see me in the hallways and especially when I come into the classroom. At our Curriculum Night, many parents stopped by to visit me, because their children had already talked so much about PLTW—even though we’d only been in class together for two days.”

She says PLTW allows the students to learn while they plan, build and test their projects.

“It takes a subject like math, which some students are afraid of,” she says, “and makes it fun to learn.”

Community members and companies such as Google, Mckinley, Stridepost, and Nutshell donated to the Ann Arbor Educational Foundation so that all seven middle schools could implement PLTW.