Pioneer High School graduate Ashley Park, a Grammy-nominated Broadway performer who most recently  played Tuptim in the Lincoln Center’s Tony Award-winning revival of “The King and I” is returning to Ann Arbor to speak at the Ann Arbor District Library.

Park will discuss her year with “The King and I,” the Tony and Grammy awards, and what life is like on Broadway from 7 to 8:30 p.m. on Friday, August 5  in the AADL’s multi-purpose room. The library is located at 343 S. Fifth Avenue.

Park will also discuss her high school battle with cancer, how the Make-A-Wish foundation granted her dream was to see her first Broadway show, “The Lion King,” and how her career led her from Ann Arbor to New York City and this Tony-winning production. 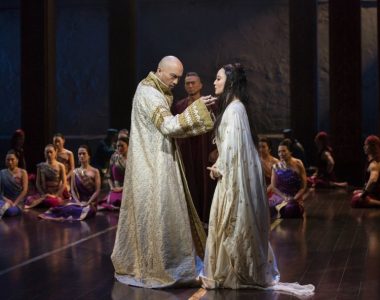 Park’s credits include a national tour as Gabrielle in Rodgers and Hammerstein’s “Cinderella” in addition to many other theatrical credits, as well as concerts and musical performances at Alice Tully Hall, Feinstein’s/54 Below and other venues.

Later this summer Park will star in “The Fantasticks” at Pasadena Playhouse for the theatre’s 100th anniversary season, and she also has been seen on Broadway in “Mamma Mia!”

She is a graduate of the University of Michigan, where she co-founded the Michigan Performance Outreach Workshop (MPOW) and worked as a member of the Prison Creative Arts Project (PCAP).

For more information about this event, call the Library at 327-4555 or go to aadl.org.