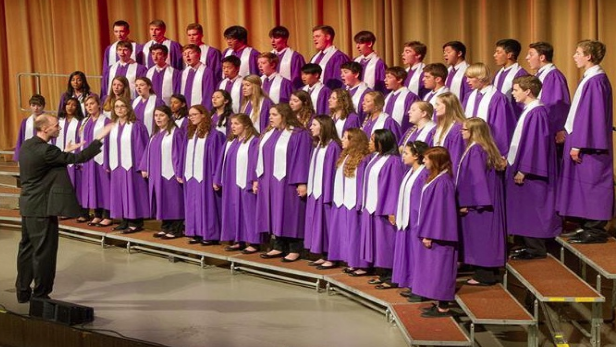 If you’re looking for a night of award-winning music, right in town, and all for free, look no further than Pioneer High School’s Schreiber Auditorium Wednesday night at 7:30 p.m.

The Pioneer High School Choirs, led by Director Steven Lorenz, will be putting on their annual Winter Sing at Schreiber – all four curricular ensembles comprising 215 students will perform – and there is no admission charge.

“The Winter Sing showcases all Pioneer Choirs,” said Lorenz. “It gives people a chance to see all of them sing on the same night.”

Lorenz and the students in the Choirs are looking forward to the performances.

“It’s always a fun night of music for the choir and hopefully for those in the audience, too,” said Dennis Ricoy, a 17-year-old senior who sings bass and baritone in top ensemble, the A Cappella Choir.

The four ensembles – the A Cappella, Bel Canto, Cantando and Cantare – will perform a variety of songs separately throughout the evening, but there is a special treat at the end of the concert. All four groups – and any Pioneer Choirs alumni who might be on hand – get together on stage to sing “Wintertime Aglow.”

It makes for a powerful sound when upwards of 225 voices – including alumni who  once sang in the Choir – join as one.

“It’s an annual tradition for all of us to sing “Wintertime Aglow,” and I’m really looking forward to it since it’s my senior year and it’s my last time doing it as a student at Pioneer,” RIcoy said.

A handful of seniors will carry different responsibilities throughout “Wintertime Aglow,” including piano accompaniment, hammer and chime, and finger symbol. Ricoy and three other students will have a special task during the song.

“I’m in Sign Language 3, and four of us are going to be signing ‘Wintertime Aglow’ as we sing,” he said.

This is the second time this year that all four Pioneer choirs will perform together. They did so at the Fall Concert and Lorenz says he relishes seeing all of his students sing on one night.

“”It’s great to see the freshmen singing shoulder to shoulder with the seniors, and to see how much they have grown in a few months,” said Lorenz, who is in his ninth year as Director of Pioneer Choirs. “That’s one of the things I enjoy most – watching the students move through the program as the years go by.”

Togetherness will be a key Wednesday night at the Winter Sing, and Lorenz says it is a theme throughout the Pioneer Choirs’ experience.

“They form bonds through singing; it’s an independent musical community,” Lorenz said. “We have a very diverse group and it’s the ultimate in teamwork.”

The Winter Sing is just one of many performances the Choirs put on throughout the year. In fact, on Sunday, Dec. 16, the A Cappella Choir traveled to Detroit to sing with the Detroit Chamber of Winds and Strings at St. John’s Episcopal Church.

“That was a marvelous experience, the venue, the musicians, everything about it,” Lorenz said.

The Choirs will no doubt give a marvelous experience to all who come to watch them sing on Wednesday night at Schreiber Auditorium. “Sleep” and “Glow” by Eric Whitacre, “O Viotus” by Hildegard, “Estonia” by Tormis and some selections from Alice in Wonderland by Lewis Carroll will be performed.

Ricoy has been in the choir since the sixth grade, including all four years at Pioneer, and says he never tires of the experience.

“It’s a constant in my life, it’s like it’s always there,” he said. “It gives me that one hour every day where I can relax and do something I enjoy so much.

“And I’m so proud of the music we make. It really is beautiful music.”