Wines Elementary vocal music teacher Beth McNally thought she was simply going to an ordinary school assembly when Principal David DeYoung surprised her with some great news: She has been named the UMS/DTE Energy Fund Educator of the Year. 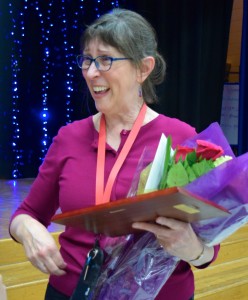 DeYoung calls McNally “a treasure to Wines and our school district.”

“Beth epitomizes the types of things that an outstanding teacher does that go above and beyond,” he says.

McNally was nominated by two Wines parents who spoke glowingly of her extraordinary work, both teaching music and integrating other subject areas into music, said Jim Leija, UMS’ director of education and community engagement.

The parents said McNally brings her love for the arts, performance, and her passion for teaching into the classroom every day, and that her enjoyment of all types of music is infectious and inspires students.

“We also know she’s been a real engine for participation in UMS programs here at the school,” said Leija, “so it’s a great opportunity to thank her for that and recognize that publicly.”

The University Musical Society (UMS), a performing arts presenter housed on the University of Michigan campus, partners with the DTE Energy Foundation to recognize schools and educators that make a positive impact.

Leija said UMS received many nominations for this award from throughout the region.

“It’s really exciting that it’s also something supported by DTE Energy Foundation as an educational partner with UMS, so the recognition is deep and meaningful,” said Leija. “And the great thing is that because of the sponsorship with DTE, we’re able to provide tickets and transportation for a class of students to come to a UMS performance next season, and we’ll also be able to support bringing an artist here to the school to work with students at some point during the school year next year.”

DeYoung admires the fact that McNally puts on a day and evening performance for every grade level, every year, and also leads a fifth grade chorus that performs at various school events and at a Board of Education meeting every year.

In addition to that, he says she meets with students almost daily at lunch, organizes field trips and experiences for classrooms, and takes part on other school-wide committees such as the Teacher Leadership Committee.

After the assembly, McNally said she was surprised, honored and thrilled for the students.

“There’s no music program without fantastic kids and an amazing group of parents,” she said.

The following is an excerpt from McNally’s bio on the Wines’ website:

I grew up in New Jersey studying piano and violin, plus when I got to high school I played string bass in numerous orchestras, concert bands and musicals. I also enjoyed singing in school and church choirs. I was a piano and music education major at Ithaca College in Ithaca, New York, and earned a Masters of Music Education from the University of Michigan.

After graduating from college I spent eight years working as a classical music DJ at NPR-affiliate radio stations in upstate New York, Washington DC and Philadelphia. That was interesting, but I wanted the kind of excitement, variety and fun that only teaching could provide. So I taught music in Connecticut and Ohio before moving to Ann Arbor, where I’ve been teaching since 1999. I can say without hesitation that Wines is my favorite school, and it’s because of the kids and their families. The Wines community is the best!