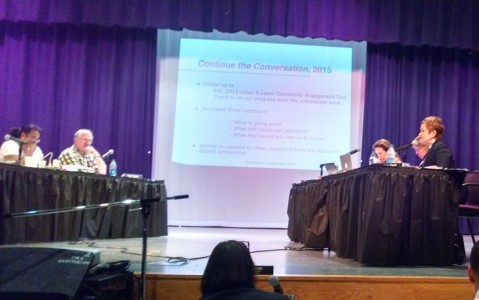 Superintendent Jeanice Swift hasn’t completed the final draft of her Continuing the Conversation Tour report, but the Board of Education is already thinking about how to address some of the issues community members raised during the tour. Swift had 12 community meetings and about ten meetings with staff across the district from January through April to get feedback on how the district is doing and what more should be offered.

Swift says during her Listen and Learn Tour last year community members came with specific items they wanted. For the Continuing the Conversation Tour, Swift believes there was more of a desire to move onto the next thing than the pent-up demand she heard during the first tour.

“It was a great opportunity to just reconnect with people and see where they are now and how they received the first year and a half of work and really to learn where they think we should go next,” Swift says. “I always believe there is wisdom in the collective and particularly when you hear patterns across various schools.”

Swift identified five over-riding themes that were repeated across the community and across building level. This included positive feedback for the 2014-15 enhancements, transportation concerns, desire for expansion of new programs, teacher and staff effectiveness, and some additional needs.

Some of these items are already being addressed, such as expansion of world language and Project Lead the Way programs in additional schools starting in the fall. District officials also hope transportation concerns will be relieved with the change in provider and some route changes.

Trustee Andy Thomas says the board is already working on teacher effectiveness as well. He agrees with community members on their assessment that the majority of teachers are excellent but a few teachers and administrators are holding back Ann Arbor Public Schools from being world class.

“We support our teachers but need to deal with underperforming teachers,” Thomas says.

Some of the other issues raised by the community during the tour that the School Board looks to begin work on include the desire for more programs in middle schools.

Board President Deb Mexicotte says they will have a study session early in the fall to look at middle schools. She says it’s a complicated issue of balancing academic rigor with giving students the ability to explore new areas during a difficult transition time.

Board members also expressed a desire to revisit how counseling services are offered and ways to improve communications between middle school and high schools and parents.

Swift says it’s great to see the School Board is on top of community concerns. “We all want to be, but it’s kind of neat when the actual data reinforces what you think you know,” Swift says.

Mexicotte says for the most part the Continuing the Conversation Tour themes are what she expected, but there were a few surprises.

”More support for our online learning, the continued interest in world language immersion which I thought may have gone away with some of the introduction of our longer world language themes,” Mexicotte says.

Swift hopes to have a final report complete by the middle of summer. This will help the School Board and administration organize, prioritize, and plan the next phase of improvement work. Swift also wants to create long-term advisory groups including teachers, parents and others in the community to help guide improvements. The goal will be to find programs and projects that make a profound difference, not just incremental change.