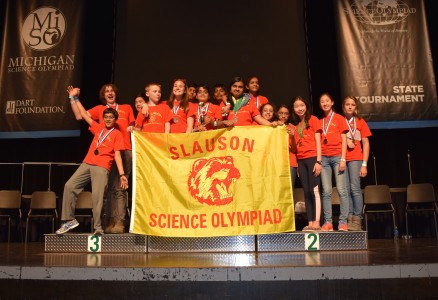 A total of 212 Division B schools competed in Regional tournaments before 48 qualified for the Michigan State Tournament. Representing Region 9, head coaches Jean Rennich and Lakshmi Atluri (Slauson) and Narayani Anand and Madhavi Manne (Clague) were thrilled with their teams’ 2015 performances.

“Our goal at the beginning of the year was to get back in the top 10 at States since we finished in ninth place two years ago,” said Rennich. “Our Olympians and coaches put in extraordinary efforts this year, but we were surprised and honored to finish so well in the State standings because the competition is at such a high level.” Slauson’s overall team score of 200 was just 11 points behind the second place team’s score.

The top two Division B teams in the State of Michigan, Meads Mill and Lakeshore Middle Schools, will compete in the upcoming National Science Olympiad Tournament in Lincoln, Nebraska. 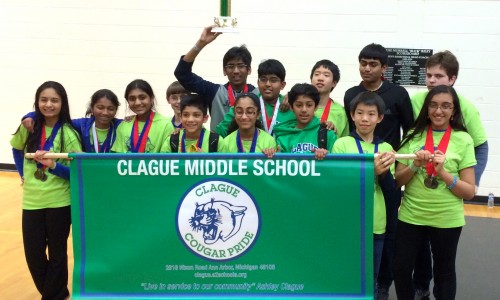 Although Slauson has been participating in Science Olympiad off and on since its inception in 1983, Clague began its involvement just eight years ago. In 2014, Clague advanced to the State tournament for the first time and their 13th place finish earned them a Best New Team Award. They continued to improve this year with a Regional victory and a sixth place finish at States.

The Clague coaches added: “We started the year with a goal to qualify for States, but the Regional victory boosted our confidence. We are extremely happy that we got sixth place at States this year and are positive about going to Nationals in the coming years.”

The top six teams in each of the 23 competition events received medals for their accomplishments.

The Slauson team events that earned medals were:

Other Slauson events that placed were:

The Clague team events that earned medals were:

Other Clague team events that placed were:

Slauson’s and Clague’s Science Olympiad programs are run entirely by parent and community volunteers, with funding from Olympian family donations, the schools’ PTSOs, and the Ann Arbor PTO Thrift Shop.