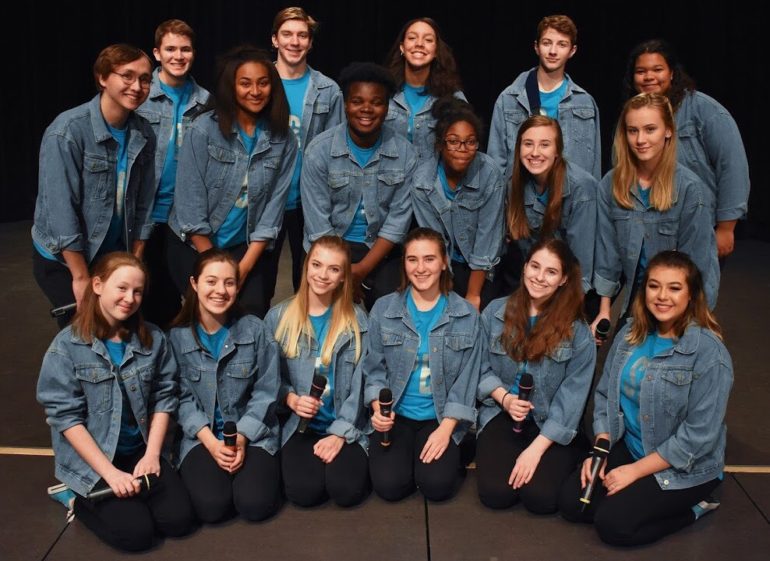 The Skyline Blues is a nationally recognized competitive a-cappella group made up of 17 Skyline High School students. And while the Skyline Blues have hit some pretty high notes this year, including qualifying for a bid in the Great Lakes semifinal in Columbus, Ohio after taking first place in their regional quarterfinal on Feb. 1, winning competitions is really a small part of what they do and is a byproduct of what matters most – their love of music.

“Skyline Blues is an experience unlike anything I’ve experienced at Skyline, Forsythe or anywhere else,” says junior Derek Mrachko. “The 17 of us are all extremely dedicated musicians and are motivated to uphold the integrity of the program wherever we go. The music is always challenging and unique and pushes the boundaries of the a-cappella genre in directions I never would’ve thought they could be pushed.”

Elena Schroeder says she loves that she can be herself in the group.

“It’s a safe space and the people in blues have become a second family,” says the Skyline junior. “These are the people that have shaped my high school experience and have given me memories that I will hold forever. Everyone in the group wants so much for the group to succeed, and that’s something I appreciate in them more than they will ever know.”

Junior Olivia Miner said: “I love that we are a family and if anyone one of us needed something we would rush to their help.”

Then she adds: “Plus, everyone sings beautifully.”

They certainly do and turning 17 voices into one is a magical experience.

The group competes every year in the International Championship of High School A Cappella (ICHSA) and recently hosted and won their regional quarterfinal (Feb. 1). That finish qualified them for the Great Lakes semifinal in Columbus, Ohio on March 23. The winner will earn a place at ICHSA finals in New York on April 26.

Mrachko says the member’s passion and drive and love of music help create beautiful harmony. He believes they won their regional because they played (sang) to their strengths.

“Being a larger ensemble, with 17 members, we’re able to put together a lot of interesting choreography, incorporate powerful dynamic contrast, and create a dense sound that fills the entire auditorium,” he said. “Not to mention, the outstanding creative efforts of our directors, Lyn CieChanski and Austin Terris, who have created a story with a powerful message for us to convey through our music.”

Schroeder says the “beautiful” music the groups makes is why they have been so successful. It’s a group of unique voices coming together and “sharing a part of ourselves and exposing ourselves in an unexplainable way.”

“The thing that I believe makes blues special is the purpose we are able to integrate into our music and the words that we speak,” Schroeder says. “We share a story that is bigger than each of us. We have made audience members say ‘thank you’ because we touched them in a way that they wouldn’t have expected.

“The Great Lakes region especially is full of so many amazing and talented groups. We are so grateful to be able to perform alongside other incredible high school performers.”

Miner, who has always loved a-cappella music and whose brother was in the group during his time at Skyline, couldn’t agree more with her classmate.

“I believe we did well because we were as one and we were all on the same page,” says Miner.

Mrachko’s sister, Abby, was a member of Skyline choir and Skyline Blues while he was still in elementary school.

“When I was in eighth grade, Skyline Blues came to do their middle school recruiting visit and I was excited. The people in the group were so encouraging and supportive and it was easy to tell that it was a very positive environment to be in.”

During his freshman year, the group competed at semifinals and he was one of the only students to make the trek down to Bowling Green to support them.

“I had an amazing time watching them perform, especially now that I knew just about everyone who was in the group,” he said. “They really encouraged me to audition at the end of my freshman year even though I was a quiet little freshie bass and I seriously did not think I would get in. But, lo and behold, they accepted me and I haven’t looked back since.”

Schroeder’s introduction to the Skyline Blues came during middle school when they came to perform.

“It was a sound and feeling I never had experienced before,” she said. “The coolest part to me was the story that went along with what they were singing about. You could tell that everyone was engaged and passionate. I knew that I needed to be involved in a group of people who all had the intention to create beautiful music and to give something to people.”

As far as the upcoming semifinals in Ohio, it’s game on as the group tunes up to take their act south of the border.
“From a big picture standpoint, the goal at semifinals is winning and earning a spot at finals in NYC,” Mrachko said.

“The groups at semifinals are always amazing and the competition is pretty stiff, so no one can make any guarantees, but it would be really cool to be the first group in Skyline Blues history to qualify for finals.”

They are putting a lot of time and energy into developing a winning performance.

“All we can do is leave it all on the stage and know that whatever the outcome is, we did the best we possibly could have done,” Mrachko says.

For more information on the group: https://sites.google.com/aaps.k12.mi.us/skyline-blues/home