The high school state playoffs can be a bittersweet time – not only do the winners advance and the losers go home, but for the seniors, it really is game over. It’s not only the end of a season, but the end of a career filled with dedication, hard work, friendships, rewards and experiences that often last a lifetime.

The starting line for the five seniors – Nick Foster, John Florence, Paul Sutton, Zac Williston and Ethan Mielock – didn’t start at Pioneer. It goes back further than that. They have been running side by side for seven years, including three years at Slauson under the direction of Coach Jon Strite.

They were good then; they’re great now – including last week at the regionals where the five seniors led the Pioneers to first place at Lake Erie Metropark as they warm up for the state finals and their final race as one. 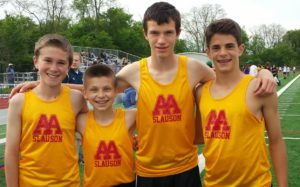 “It feels like we are all brothers at this point in the game,” says Mielock. “We have been together so long, we know very well how each other will race and react to situations. We all are pals and joke around with one another and know what motivates each other.

“It feels like we are racing for each other and not just the team. Looking back at it, I feel honored to have this opportunity to race and spend time with them for so many years.”

Sutton feels the same way – as the others do as well.

“I hadn’t really thought about Saturday being our last XC race together,” says Sutton. “I guess the perspective from this is that we’re going to make a great memory out of this meet and tap into everything we’ve got so it’s exciting. I’d like to make this not only the last but the best that we’ve had as a pack.

“It’s bittersweet because we’re super excited we’ve all made it to States and get to run as a competitive pack – who would have thought – but it’s also the end of an era.”

The beginning of the era started with a bang and has been on pace for big things ever since. At Slauson, they would routinely take the top five spots and broke Slauson’s 4×800 relay record in 2015 – a record which still stands.

“The team at Slauson was like a family,” Mielock says. “Nick, John, Zac, Paul, and I have known each other pretty much since the start of sixth grade. We all enjoyed running and had similar interests, so our time together has been really special.”

Mielock has been good friends with Florence since first grade and can remember foot racing him in elementary school. He called their friendship a “lifelong race against John.” It was at Slauson where the five guys got used to the idea of dominating.

“Slauson would win close to every cross country and track meet just because we had such a large number of runners,” Mielock says. “This taught us five guys that it is possible to win and we should work toward it. More specifically, we all learned on the Slauson team to compete. While we were always close-knit, when it came time to race, we all became opponents.”

The group would all compete for first at the Slauson cross country meets (Foster would win most of the time – even back then). But it was the overall approach to competition that was born within the five at Slauson that has served them so well ever since.

“This attitude benefitted us immensely going into high school and running under coach Sleeman,” says Mielock. “Also, another thing that benefitted us in middle school was that our coach made running fun. Our middle school coach would always bike with us places and show us around the city. This built an appreciation in us that we all carry to this day for distance running.”

Sutton was introduced to running at Slauson and the introduction went well.

“I was on my fifth year of competitive hockey and then joined the cross country team as a lark in sixth grade,” he said. “I’d never run before. I was a quiet kid way too tall but the team immediately felt good – inclusive – and Jon Strite made me feel like running was a gift and it was just fun. He made me feel like I was good at it and the confidence from that got me through middle school and has driven me ever since to feel passionate about this sport.”

Mielock didn’t realize then what he knows now.

“I do not think we knew we were a special group in middle school,” he said. “All we had ever known was going one, two, three, four at the city cross country meets. It was normal for us to run close times to the Slauson school records. We just were a group of guys who liked training with one another and had the drive to run hard.

“I think secretly Coach Strite realized we were something special, but did not tell us about it. He later said to me, ‘I was not training you guys, I was just helping you enjoy running. Coach Sleeman would train you well.”

That approach has worked well. The Pioneers come into MIS on Saturday as the defending state champions. Whatever happens on Saturday, they will go out on Saturday – together, as it should be.

One final race. One last finish line. And a lifetime of friendships, lessons, experiences, and memories.