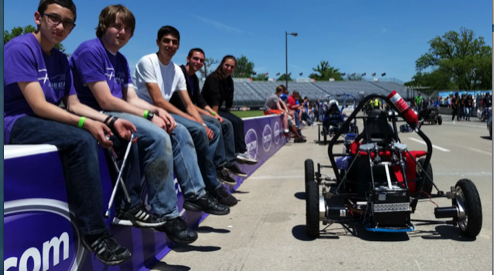 The after-school program allows students to build a car from the ground up and then participate in a race at the end of May. The program is sponsored by the Square One Education network.

“With only two returning students this years, Pioneer’s team had a lot of ups and downs,” said Steve Armstrong, chair of the science department at Pioneer High School. “Ultimately, the team persevered and saw the car drive. This completely student-led team designed, fabricated, and wired the car from scratch.”

After months of trying to use motorized bicycle tires, the team decided to scrap the idea due to problems with the motor controllers and the wheels’ large radius. As the weeks passed, the team put in many hours redesigning and fabricating large parts of their car.

The day of the competition arrived and the Pioneer IVD crew travelled to Belle Isle unsure exactly of what they would find. After completing a few last-minute revisions in order to allow the car to compete, they kept up the drive to finish, and in the end, they were able to show their persistence and race the car, Armstrong said.

Pioneer’s team found several opportunities outside of the usual curriculum, as well. The team partnered with a DENSO lab to develop methods to prevent teen distracted driving. As part of an ambassadorship program, the team also volunteered at elementary schools’ science fairs, showcased the car during the incoming 9th graders’ day, and supported a Girls In Computing lunch at Pioneer. During Pioneer’s trailblazer day, they allowed elementary students to be in the driver’s seat while the team pushed the car around.

“Overall, the team learned many new skills and gained some great memories that will stick with them a lifetime,” said Armstrong.