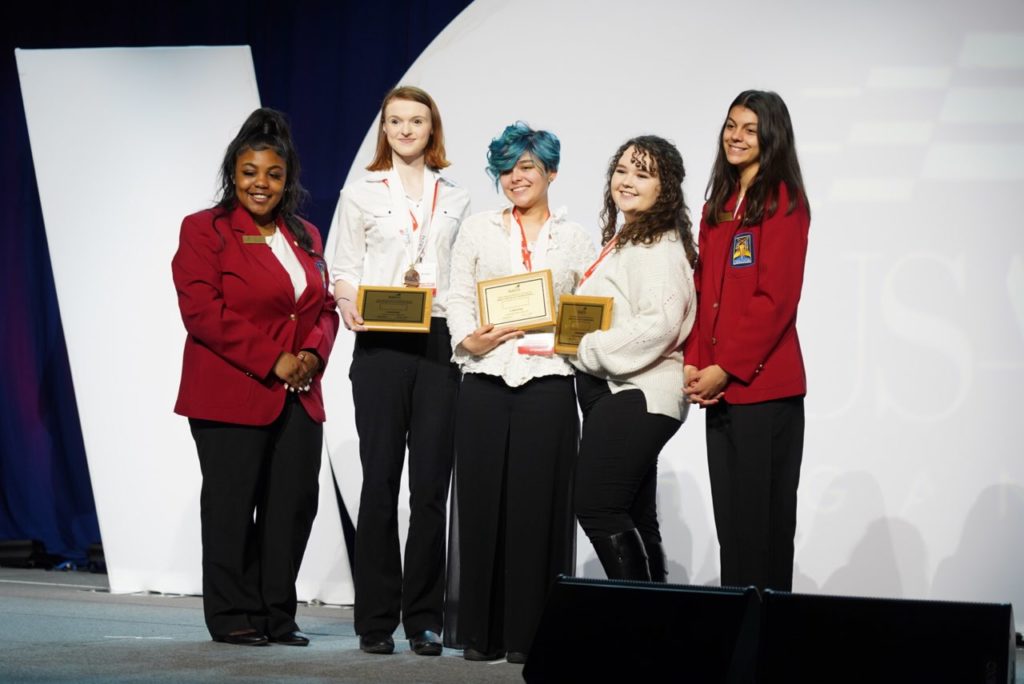 In mid-March, 72 members of the Huron Business Professionals of America (BPA) Chapter competed in the BPA State Leadership competition in Grand Rapids. Twenty-four of those students will be advancing to the National Leadership Competition which will be held in Anaheim, California, in May. The students who will be advancing to the Nationals are: Harrison Baker, Maya Baveja, Maddie Bowers, Ani Cowlagi, Sampath Eaty, Avni Guduri, Prathik Guduri, Daniel Hou, Dane Hubers, Sid Jha, Nihar Joshi, Candace Jung, Bridgit Jung, Young-Bin Kim, Catherine Kim, Anay Laddha Isaac Madhavaram, Miriam Mahmoud, Sophia Papadopoulos, Praveen Prakash, Nishita Shah, Aarnav Unadkat, Kenny Yue, and Jonathan Zou. Additionally, the Huron Chapter was awarded the State Service Project award, an honor given to the chapter with the most involvement in the BPA State Service Project, which was “Serve Those Who Serve.” The Huron Chapter completed over 50 hours of community service and raised almost $500 for veterans causes.

Pioneer Senior, Josie Leydenfrost, has been chosen by Wharton Center Institute for Arts & Creativity and the Michigan State University Department of Theater as one of six finalists of the 23rd Annual Young Playwrights Festival for her play “Last Letter Home”. Each of the finalists will work with a professional theater mentor who will assist them with revising their one-act plays for production. Josie’s play, along with the other finalist submissions, will be performed on May 11 at the Pasant Theatre on the campus of MSU. For more information about the Young Playwrights Festival 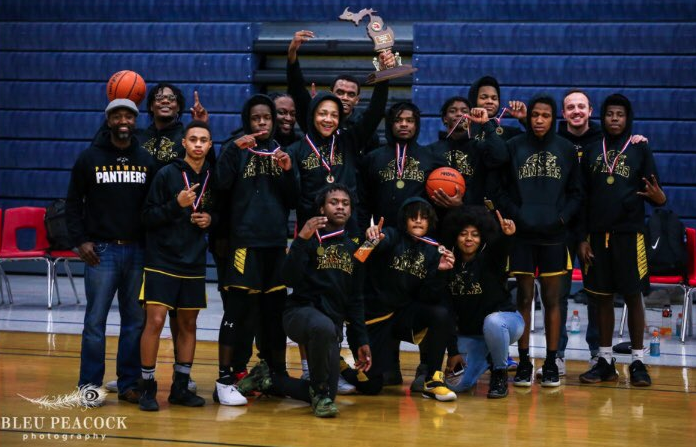 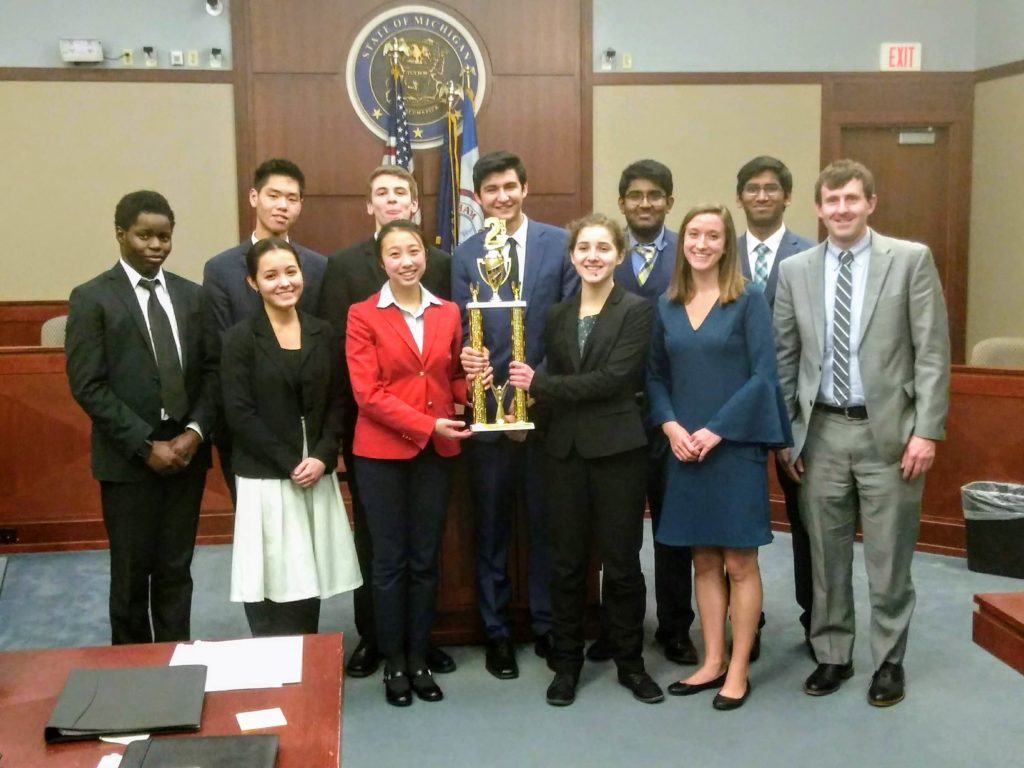 Three AAPS students took the top awards at the Ann Arbor Optimist Club annual oratorical competition on March 17. The contest, which was open to all Washtenaw students under age nineteen, asked participants to address the question, “Is there a fine line between optimism and reality?”  Community High sophomore, Elizabeth Shaieb, won first place. Second place was awarded to Pioneer senior, Seraphina Botero, and Pioneer sophomore, Maria Rita Fata, received third place. Shaieb will advance to the next level of competition.

Skyline Blues, under the direction of Lindsay CieChanski and Austin Terris, won the Great Lakes Regional Round of the International Competition of High School A Cappella (ICHSA) on March 23. Skyline Blues now advances to the ICHSA National Championship at New York City’s famed Town Hall on April 26.

The PiHi Samurai ousted 37 teams to win the First In Michigan District Robotics competition that was held in Livonia recently. They advanced to the Michigan State Regional Championship and finished with the best competition record so far this season.  This qualifies them to compete in the First Championship World Competition in Detroit on April 24-27. This competition will feature over 700 robotics teams from around the world along with educators, industry professionals, sponsors, organizations and colleges and universities. The PiHi Samurai are coached by Solomon Shurge. 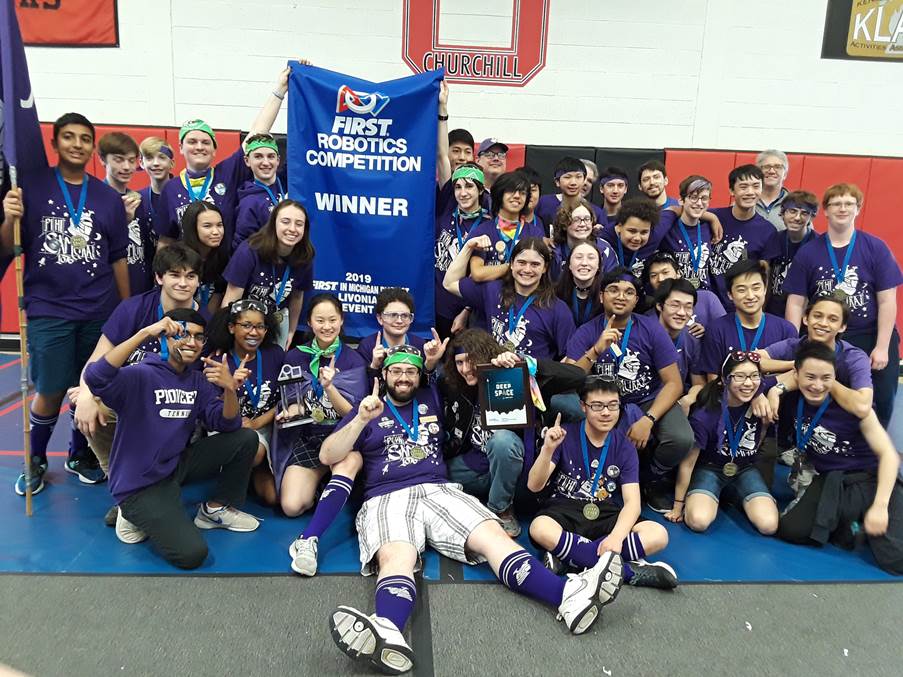 Huron High School teacher Jonathan Cook was presented with the Barbara Chambers Outstanding Advisor Award by the Michigan Business Professionals of America (BPA) at their annual conference in Grand Rapids in March. The award is the highest honor for BPA advisors and recognizes those who routinely excel in their advisory role. BPA is a national career and technical student organization consisting of 25 state associations and more than 50,000 members from over 2,700 chapters. 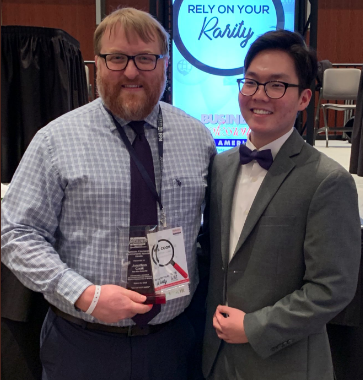 The Ann Arbor Student Building Industry Program was selected by the Home Builders Association of Michigan to be featured in a recent issue of Michigan Builder Magazine. The article recognizes the 49-year history of the student building program and highlights recent projects in the Kirkway subdivision in Scio Township along with quotes from Skyline student, Corynna Hampton and Community High student, Hunter Guyer. Last year’s Team 48 built a 3,500 square-foot home which sold for a record $440,000. Mark B. Valanchine II serves as the lead instructor for the program.

The Pioneer High School Econ Team, under the supervision of Karla Hitchcock, recently defeated fifteen other teams at the National Economics Challenge at Walsh College in Novi. This win advances the team to the regionals and, if successful, the opportunity to compete in the national finals in New York City. They will also be honored at a dinner at the Detroit Branch of the Chicago Federal Reserve in late May. Congratulations to Sujay Kulkarni, Erik Kirakosyan, Sunho Kwon, and Sriram Garapati.

The Ann Arbor Pioneer High School A Cappella Choir has been designated through blind audition as the Michigan School Vocal Music Association (MSVMA) 2019 Michigan Youth Arts Festival (MYAF) Outstanding Choir.  Only two choirs from across the state are given this distinction, which represents the highest level of recognition by our state organization, MSVMA. This is the third time in the past six years that they have received this distinction.

Huron High School students Adam VanderMolen and Axel Avram are honing their rocket building skills as participants in the 2019 Team America Rocketry Challenge. As Civil Air Patrol cadets with the Kevin A. James Memorial Composite Squadron in Ann Arbor, Adam and Axel are teamed with six other cadets to build a rocket that, if successful, will earn them a spot in a national competition. Qualifying teams are tasked with launching a rocket carrying three raw eggs to a height of 856 feet and having it return to the ground intact within a window of 43-46 seconds.

Wines Elementary teacher, Sarah Schemanske, has been recognized as a Blue Ribbon Educator by Tynker, an educational programming platform which promotes coding for kids. As an educator for over thirteen years with expertise in teaching robotics and coding, Ms. Schemanske is the PLTW teacher at Wines and a PLTW Master Teacher who inspires her students through rich learning experiences. 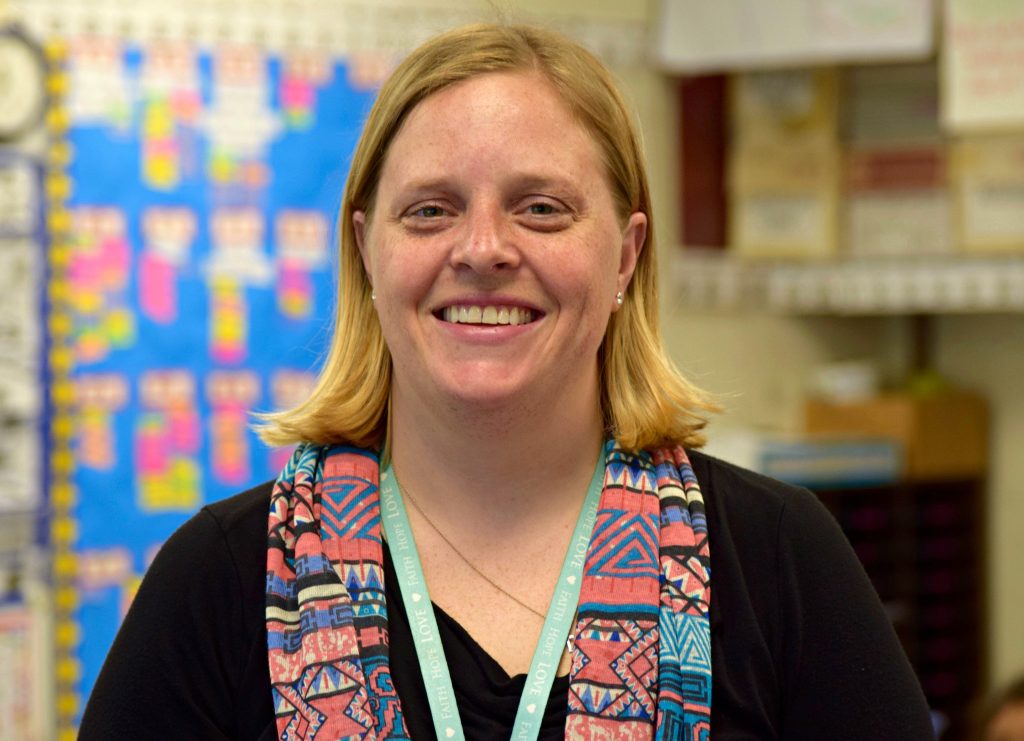 Huron High School Latin teacher, WIlliam Finch, has received the 2019 Glenn M. Knudsvig Award for Outstanding Latin Teaching in Michigan Secondary Schools. Recipients of this award are nominated by UM undergraduate and graduate students, UM Latin faculty, and secondary instructors and administrators. Mr. Finch will be presented with his award at the Department of Classical Studies’ Phillips Classical Prize Ceremony on April 23. 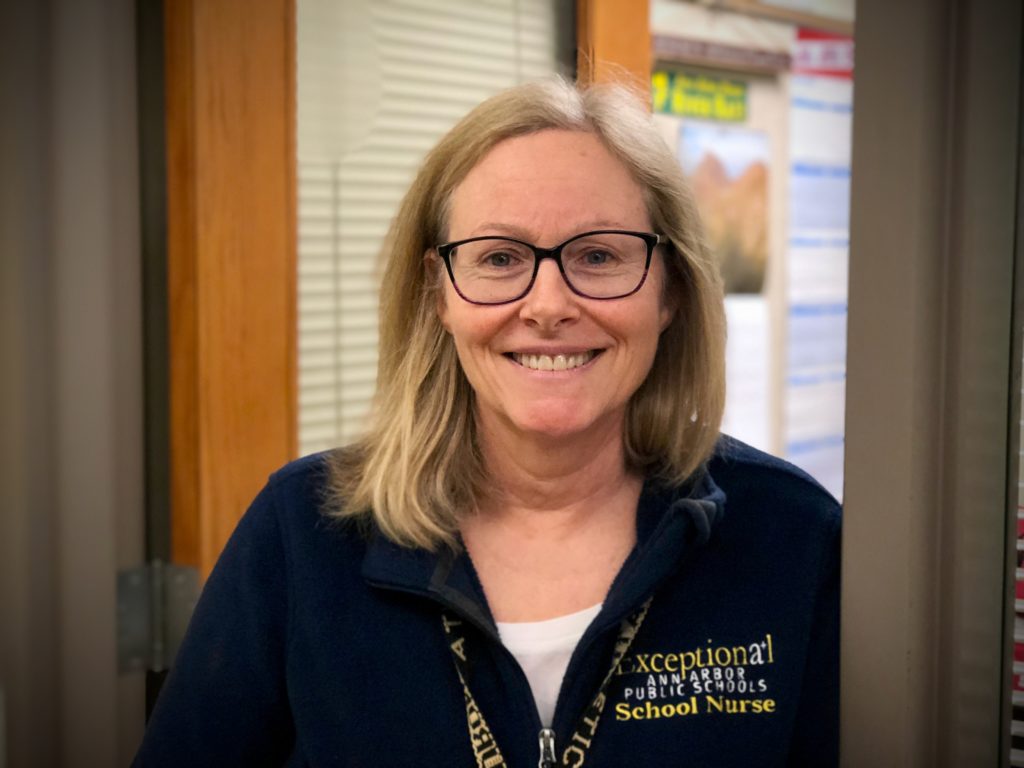 Thurston Nature Center received the Water Quality Protection Award at this year’s 22nd Annual Environmental Excellence Awards for protecting and improving a 20-acre nature center, including a pond, rain gardens, native plant shoreline, and prairie. The Thurston Nature Center is located adjacent to Thurston Elementary and Clague Middle School and is managed by a sub-committee of the PTO at Thurston Elementary. 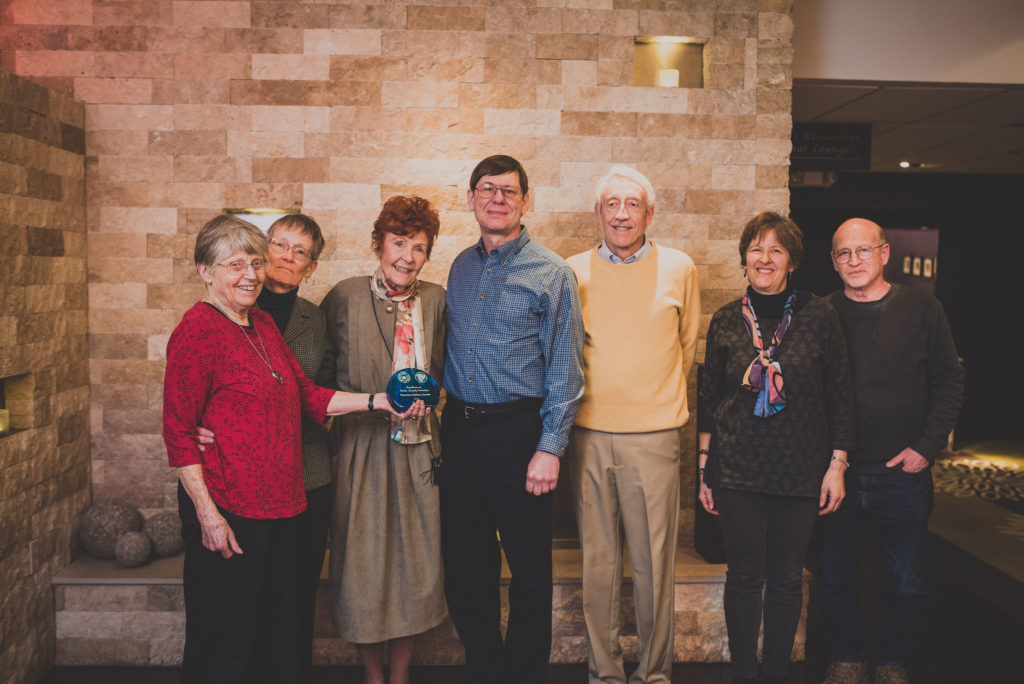 The National Association of Music Merchants have once again named Ann Arbor among the  2019 Best Communities for Music Education. For more than a decade, Ann Arbor Public Schools have been honored annually by NAMM with this designation. To receive this distinction, districts must demonstrate outstanding achievements in efforts to provide music access and education to all students. Award criteria include funding, graduation requirements, music participation, facilities allocation and support for music programs.

The Pittsfield Elementary PTO won first place and a $1000 grant from Get Movin’ Fundraising for their video that promoted the school’s Lego Fun Run. The contest, which encouraged schools to create promotional videos that generated excitement about an event-based fundraiser, judged selected winners based on creativity and engagement. To see the winning Pittsfield video

Huron High School teacher and Math Department Chair, Peter Collins, recently published his 108th crossword puzzle in the Sunday, April 7, edition of The New York Times. Peter, a veteran teacher of thirty-nine years, has been creating crossword puzzles for The Times since 2006.