Three Community High School students will always remember the day they covered a spirited debate between Bernie Sanders and Hillary Clinton in Flint.

As journalists who work on “The Communicator,” CHS’s online and print publications, they sought out and snagged press passes to cover the debate in Flint Sunday night.

“The thing I’m always going to remember is the franticness of the press corps when something big happened,” said Matthew Ferraro, co-editor of the online edition of “The Communicator.” “The first big thing was the protest right outside the press center. It was very loud—they had drums and whistles. They were intent on getting our attention, and they did.”

Protestors were angry about Governor Rick Snyder’s handling of the Flint water crisis.

The second frantic moment, Matthew said, came when it was announced that Sanders would hold a press conference, and that former Michigan Senator Donald Riegle would endorse him.

That news was followed by dozens of journalists rushing through a narrow corridor to get to the room with Sanders, he said.

When Sanders called on “The Communicator” photographer Grace Jensen during his press conference, he treated her as he would any other journalist, the students said. 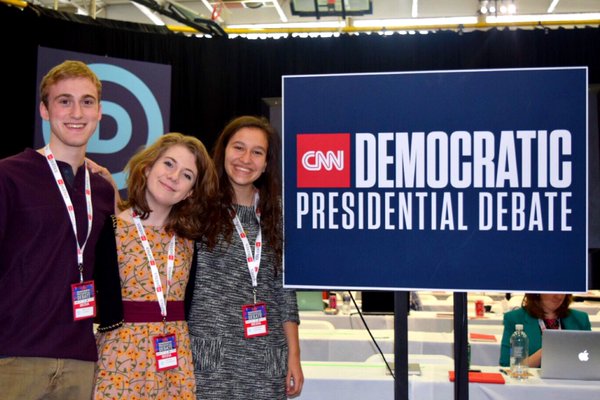 Hannah Rubenstein said it was exciting just being in the same room with famous politicians—not to mention actor and water activist Mark Ruffalo, a Sanders supporter.

She said the whole process was eye-opening and amazing.

“I’m so grateful they gave us that opportunity,” said Hannah, who tweeted throughout the debate. 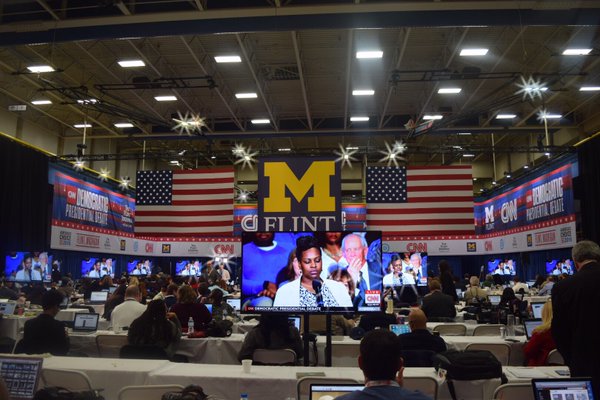 Tracy Anderson, advisor to “The Communicator,” said she is incredibly proud of the students for going through the process of securing press passes, as they’ve done for so many other events, including the 2015 Pan American Games in Toronto.

“They learn so much about communication in that process,” said Anderson, who teaches English at the school. “The students take the lead on it, and I support them by saying, `You can do this.’ And I always remind them that they are a journalist, and they have the right to information.”