When Pioneer High School quarterback Conor Easthope learned that University of Michigan football coach Jim Harbaugh and his brother, Baltimore Ravens Coach John Harbaugh were stopping by Tuesday afternoon to talk with the team, he was psyched.

“It’s really cool having both Coach Harbaughs in the building today,” said the sophomore. “That’s a lot of football knowledge. A lot of years of experience. It’s definitely going to benefit our program at the end of the day, and that’s what it’s all about.

As for reaction from the other guys?

“There’s definitely a lot of excitement about this—you don’t have two Super Bowl competing coaches in the building very often,” he said.

The Harbaugh brothers—who each played football for Pioneer in the late 70’s—were at the school Monday at the invitation of Varsity Football Coach Bill Bellers, who met John Harbaugh last summer at the open house of Bellers’ student and Harbaugh’s niece.

Bellers that fall texted John some kind words about the Ravens’ season and quickly received a response of thanks. Bellers asked Harbaugh if he could come to talk to his team sometime when he was back in Ann Arbor.

That time was Monday. And Harbaugh made the visit even sweeter by bringing his brother, who, of course, is University of Michigan Football Coach Jim Harbaugh. Their father, Jack, also a coach of many years, came along as well.

For the Harbaughs, it was a homecoming.

John Harbaugh played football for Pioneer before graduating in 1980.

Jim was Pioneer’s quarterback until his family left Ann Arbor after his sophomore year when his father Jack, an assistant on Bo Schembechler’s staff from 1973 to 1979, left to coach at Stanford.

This is the second time in the last three years the Harbaugh brothers have met back at Pioneer High School,

In March of 2016, the two were inducted into the Pioneer Athletics Hall of Fame during a gala fundraiser attended by renowned athletes and dignitaries.

Most of the players were surprised to walk into what they thought was a routine 3:45 p.m. meeting in the annex—only to see the Harbaughs at the door.

“What!” one player exclaimed as he quickly joined his teammates.

The brothers reminisced about their time at Pioneer—which they clearly treasured.  When John recalled Jim becoming quarterback as a sophomore, Jim was able to remember who the Pioneers played that year, and which team won.

The Harbaughs urged the crowd—which also consisted of  other students who had learned about the visit—to encourage classmates to come out for football. They cited teamwork, prestige, self-esteem, work ethic, and college scholarships as some of the many benefits of playing the game

John said all the other sports are great, too.

“But what is it about football?” he asked, before acknowledging that while football is tough and not always fun,  it’s something special they will take with them the rest of their lives.

Jim urged the team to consider which of their classmates could be playing football.

“With our school here having 2,000 kids— go recruit the other kids in school here!” he said. “Start there … Get a friend or two. Bring a buddy to the football team. Double the amount guys on the team. The more, the better. More is more in football… Less is not more in football. More guys. More competition. More people pushing each other.” 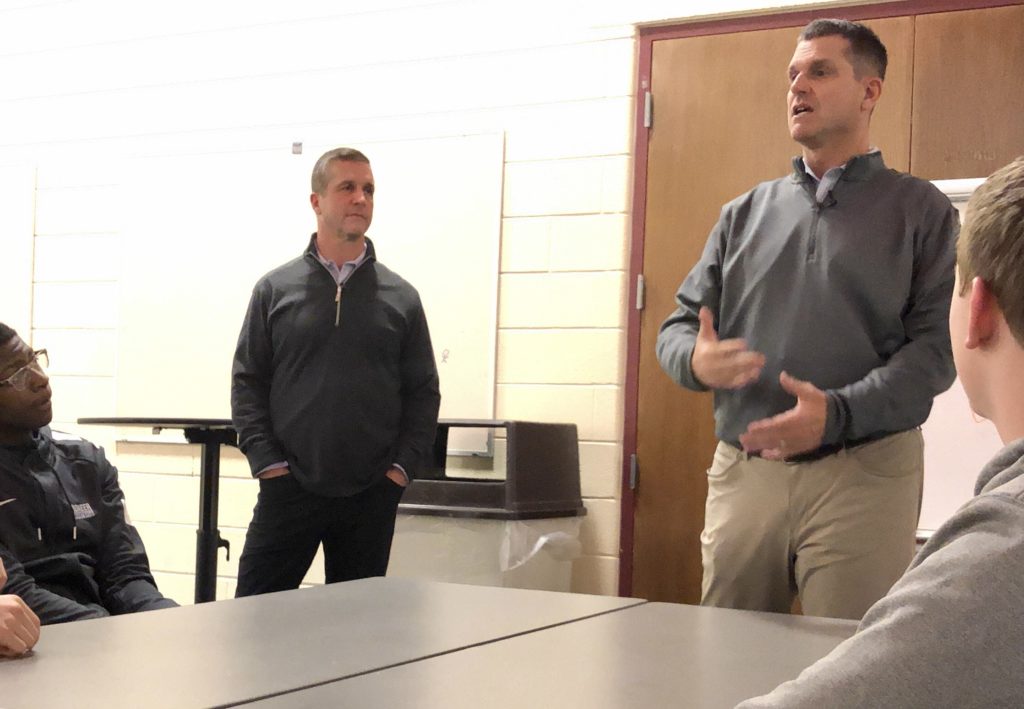 “Football helps a lot in terms of getting an education after high school,” he said, noting that football helps more students than any other sport because of the high number of players.

Coach Bellers said the day meant a lot to him, his fellow coaches and the team.

“Pioneer is steeped in so much tradition,” said Bellers, who has been coaching at Pioneer for six years and teaching for four. “There’s reason to be proud of that tradition, and proud of being a Pioneer. So this was a good way to have guys who obviously are known that went through it. John is a Pioneer alum; graduated from Pioneer; played on Hollway Field just like our guys do. For him to come back and tell them that it still resonates with him,  and these guys came before our guys; it will hopefully continue to instill that lesson I’m trying to teach them about how fortunate they are to be here; that we are part of that tradition and we are continuing to build upon the foundation that others laid before us.”