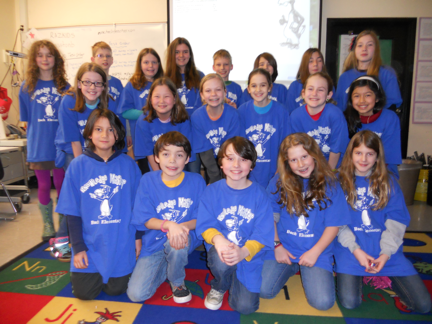 The K.M.O. is a team academic contest that tests students’ ability to answer questions about all the school subjects. The Bach School K.M.O. Team scored 515 out of a possible 1000 points. The average score in Michigan was 497 and the mean nationwide was 481.  We were above the mean in the state and the country.

How’d They Know That?

Kristin knew how to figure out the number of syllables that would be in the last line of a stanza…  Emma knew that chlorine compounds are used to purify water supplies…  Christina offered excellent typing skills…  Maggie knew that four of the five first U.S. Presidents were born in Virginia…

Dorothy knew that hemoglobin transports oxygen…  Aliya knew that the main divisions of the U.S. Constitution are called articles…  James knew that the “American March King’s” initials were JPS (John Philip Sousa)…  Chava knew that an alliance between North and South Korea is unlikely…

Camryn knew that the difference between ⅘ and 9/6 is .7…   Quinn knew that the land French explorers named after King Louis XIV was along the Mississippi River…  Jack knew that the team names in the most recent Super Bowl were inspired by a poem and prospectors (Ravens v. 49ers)…  Carina knew that Shere Khan was not a good guy…

Bella knew that if you rotate a rectangle, you get a cylinder…  Ethan knew that Polaris is in the handle of the Little Dipper…   Reid knew that the Lincoln Memorial was built to echo the Parthenon…

By Tara Cavanaugh Ann Arbor Police Chief John Seto looked official in his officer’s uniform, complete with two guns and a large walkie-talkie slung around his waist. But to Jessica Sawin’s small and squirmy class […]

Some 450 physics students at Skyline High Schooare taking part in Crash Test! one of 28 projects funded this fall by the AAPS Educational Foundation. […]