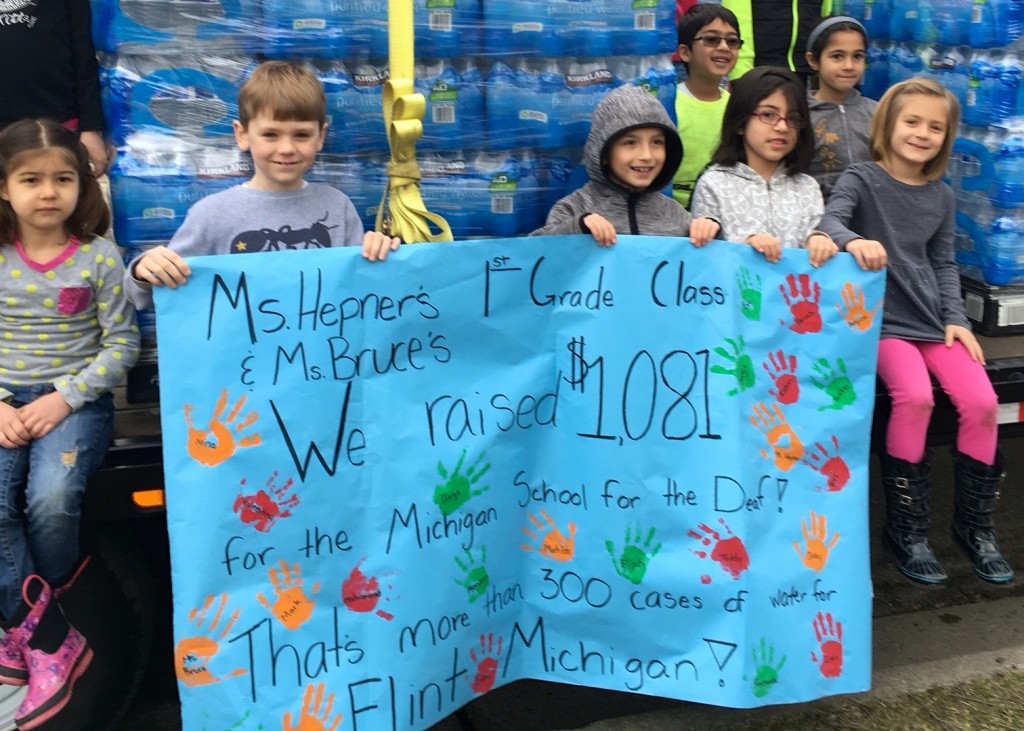 Under the guidance of a student teacher from Eastern Michigan University, first grade students at Angell Elementary School raised more than $1,000 to send 300 cases of bottled water to a Flint school.

The water was delivered to Angell last week and will be transported to the Michigan School for The Deaf in Flint in early April, when students there return from spring break.

The fundraiser arose from a unit of study on needs and wants in society. Under the direction of student teacher Abigail Bruce, students in Kristina Hepner’s class researched the issue of the Flint water crisis, staying away from all the political aspects of the tragedy.

“The first graders took on this project with passion,” said Principal Gary Court.  “They felt compassion for the residents of Flint, especially the children,  and that motivated them to take decisive and kindhearted action.”

Bruce, a senior from Brighton studying early childhood education, sought to help the students understand the differences between a need and a want. The children learned that a need is something you must have to survive, and a want is something you would like to have or do.

After learning the distinction, the group began identifying examples for both. The class then moved on to talk about how not everyone has their needs met, which is where the Flint water crisis came in. The students researched how the issue arose by looking at pipes and how water travels through the pipes, and how the lead got into the water.

“It was at this time that the children came up with the idea to hold a fundraiser to buy water for Flint,” said Bruce, whose mentor is Kathy Ashton-Miller, a lecturer in the EMU College of Education. “The class worked together to create a plan, inform others, and collect donations.”

The class incorporated the unit and associated fund raising into every area of study. In math, they learned how to count and sort the money, keeping a running total on the board of how much the class had raised.

In science, the group observed how different types of water can cause damage. They observed two pennies, one penny in regular water and another in salt and vinegar.

The students wanted to help the community, so they set a goal of being able to buy 200 cases of water, worth about $1000.

For two weeks, they collected money and water. They asked for donations from their friends and family and from the entire Angell community. They did chores at home for extra money and brought in loose change.

And then, on the day of the Michigan primary, the students manned an information table in front of the school (a polling place), where they shared their fund raising goal and non-political perspective on the Flint crisis. Intrigued voters offered further donations.

“This was definitely quite an achievement for a group of six- and seven-year-olds,” Hepner said.

“Every day, (the students) would sort the money they had collected and would add it to the previous day’s total. They were so excited to not only achieve their goal, but to surpass it by raising $1081. Then, they were even more excited that with Costco’s prices they were able to buy more than 300 cases of water.”

Added Bruce: “It was an amazing experience to see just how active and engaged the students became in this topic. And then, it was so neat to see them being able to vocalize everything they learned about the Flint water crisis to the voters who stopped to listen to them. I continue to be amazed by what children can accomplish with guidance and support.”