For a video story from The Communicator Online, reported by student journalists at Community High School, visit them online and click on school news.

Neda Ulaby’s memories of Community High School involve mornings at the school library reading the New York Times with a doughnut before class. Time spent with the newspaper’s arts section helped mold her interest in the arts. 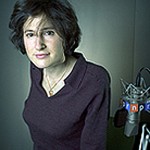 She eventually was led to a reporting career at National Public Radio in Washington, D.C., where the 1989 CHS graduate now works, covering the arts and culture beat where she profiles authors, musicians and reports on news about arts.

She returned to her alma mater earlier this month, speaking to groups of English and journalism classes.

“It was in that library – now the gym,” she told the students. “that I began to have a sense of what arts journalism was, what it could be.”

While working on a doctorate in English with aims to be a university professor, she had to move to Topeka, Kansas to care for an ill relative. While there, she freelanced for a local newspaper and became “addicted to the instant gratification of writing a story and getting it published,” she said.

Ulaby found her way to NPR in 2000, eventually landing a full-time job covering the arts beat. About half of her story ideas are self-developed, with others assigned by editors and breaking news in the arts.

“In my trade, ideas are the currency,” she said. “It’s got to be a constant stream. I get my ideas from every place.”

Ulaby told students that sometimes people are led in unexpected directions, which is not necessarily a bad thing and that she is happy to have found her way to public radio.

“There are advantages for not being the first out of the gate,” she said. “If you treat it as an adventure … you’ll be OK. You’ll have a good time.”

She suggested to Community High School students that they embrace their time learning, not just inside of class, but outside of the school walls. She also recommended that students spend time developing relationships with mentors who can help them discover what they want to do with their lives.

A journalism career will be different for this group of high school students because of all of the changes in technology, she told them. “It’s such an exciting time – you’re going to make it happen.”

Ulaby was born in Amman, Jordan, and grew up in the Midwest, coming to Community High School as a sophomore and graduating in 1989. She attended and graduated from Bryn Mawr College.

She currently lives in Washington, D.C.

[soundslides width=”475″ height =”413″ id=”8646″] By Tara Cavanaugh Congratulations to this year’s graduates from the Ann Arbor Public Schools! These are photos from the five graduation ceremonies that took place between June 4 and June […]

Three orientation sessions are scheduled for Ann Arbor school district families interested in applying for one of 108 open freshman slots at Community High School for the 2010-11 school year. […]

Community’s Stoler one of 24 selected as ‘Best and Brightest’

Kayla Stoler, a 2010 Community High School graduate, has been named one of 24 outstanding graduates in the “Best and the Brightest” report from The Detroit News. Four other Community grads were selected as runners-up. […]