Starting this fall, the Ann Arbor Public Schools will switch to all-day kindergarten. This means a whole host of changes are coming for the district – and so is enhanced education for incoming kindergarteners. 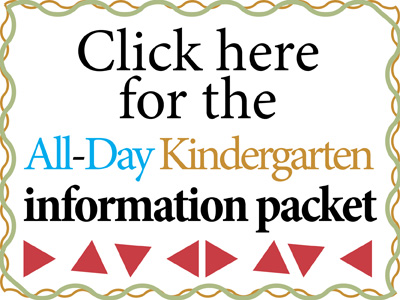 AAPS, which up until now has offered all-day kindergarten at six of its 20 elementary buildings, was pushed to make the change due to the state legislature’s January decision to cut some funding from public schools that did not offer all-day kindergarten district-wide.

“It was estimated we would lose about $3 million from the budget if we did not move to all-day kindergarten,” said Dawn Linden, assistant superintendent for elementary education. “To do all-day kindergarten district-wide, it would cost us about $1.5 million. So it’s the lesser of two evils.

“But all-day kindergarten is good for kids – the research supports that,” Linden continued. “We’ve known that for years. With budget cuts and hard times, we couldn’t afford to make it happen. Now we can’t afford not to.”

Part of the costs will come from hiring and training 11 new teachers, Linden said. For those new teachers, there also has to be 11 new classrooms, and the district has already negotiated the space in the elementary buildings.

Although the district is adding more teachers and using more classrooms, it won’t add more curriculum. “We’re not looking to pack the full day with additional elements of curriculum, we’re just looking to enhance it, to help with integration,” Linden said.

The move to all-day kindergarten has been heartily welcomed by teachers. (See above video, “Kids love kindergarten at AAPS”)

“It allows more time to go deeper into subjects, instead of just skimming the surface,” said Leslie Binder, an all-day kindergarten teacher at Allen Elementary. “When I taught in a half-day program, I felt like I was kind of just touching on things.”

Binder has been with the Ann Arbor Public Schools for more than 18 years. Her school switched to offering all-day kindergarten six years ago.

“Now, when you’re doing a science unit, you can do more exploration of that science, you can do more writing about that topic, do more read-alouds and be more hands-on with it, which you didn’t have the time to do before,” she said.

“And now the kindergarteners are part of that elementary school,” Binder continued. “Instead of always leaving and missing everything, now they’re there for the day, and they’re riding the bus for the day and doing lunch. It’s been a nice transition for us (at Allen), I know that.”

Parents are often surprised by how prepared their kids are for all-day kindergarten.

“A lot of parents have used preschool or childcare over the years,” Binder said, “so kids come in ready.”

The district is also helping parents be ready by creating a packet of information, which features frequently asked questions and research that supports all-day kindergarten.

“I think the district’s doing a nice job of making sure people are on board,” Binder said. “They’re giving lots of information to families who have questions. It’s not only the kindergarten teachers who are informed about this, it’s also their principals and that’s important. So people can talk and let parents know it’ll be great experience for their child.”

A series of four budget meetings are scheduled around the district this month to get public feedback on the 2010-11 fiscal budget. An online survey also invites reader feedback. […]

The Ann Arbor Public Schools Facebook fan page gets a lot of support. To show our appreciation, we’re throwing a giveaway! All our Facebook fans will be entered into a contest to win a $50 […]

The Ann Arbor Board of Education has adopted a budget and set millage rates for 2010-11. Consolidated transportation remains under consideration. […]